My sister and I had very active imaginations when we were kids. We acted out plays with our stuffed animals, pretended we were time travellers, and frequently visited Narnia – but what we really loved was solving mysteries. Fuelled by a diet of books such as Enid Blyton’s Famous Five and Adventure series1, we’d pedal around our neighbourhood in the summer, looking for clues to the epic acts of iniquity and skullduggery that were surely lurking around every corner.

The trouble was, our neighbourhood was the kind that is distinctly devoid of iniquity and skullduggery2 – all near-identical three- and four-bedroom homes with carefully maintained lawns and rose bushes. Beyond some distinctly non-mysterious teenaged loitering outside the off-license, the biggest crime in town was probably the vandalization of the swings at the local playground.

We were not discouraged by this less than promising environment, though. In fact, the facade of peace and good order that the local crime syndicates had obviously thrown up to thwart us just made us even more determined to find the clues that would lead to their downfall. So, when we found some mysterious pieces of yellow plastic on three different streets near our house, we just knew we were onto something. As we found more and more pieces, we started to put together all kinds of theories and plots about international smugglers, kidnap victims trying to lay a breadcrumb trail for us to follow, and other schemes I can’t remember. Those few little pieces of yellow plastic kept us happily occupied for literally days.

We never did solve our mystery, but I was recently reminded of how much fun we had trying. You see, the streets of East Vancouver are suddenly full of some really meaty, juicy clues: 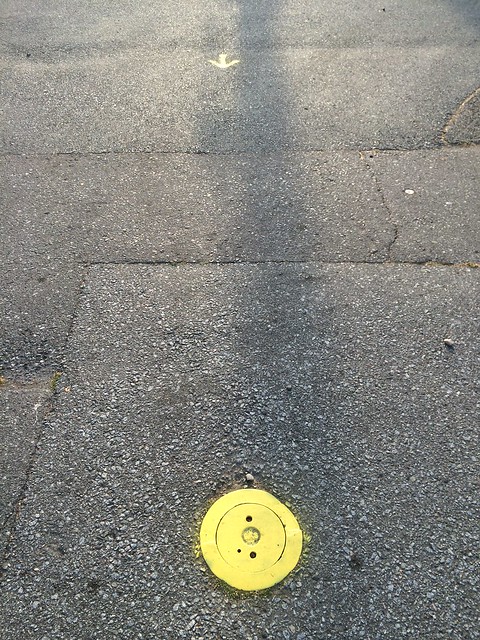 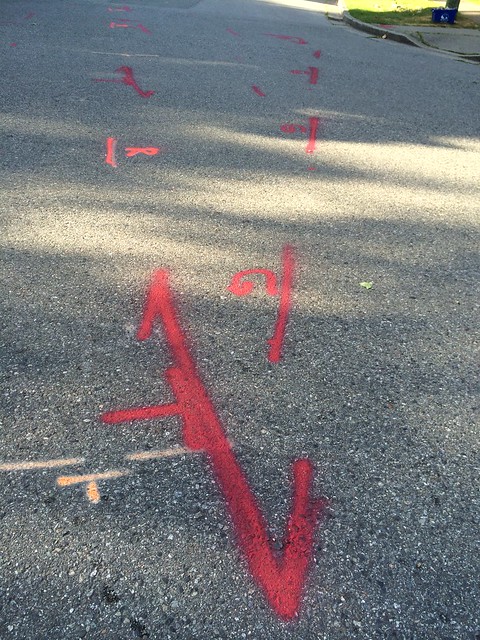 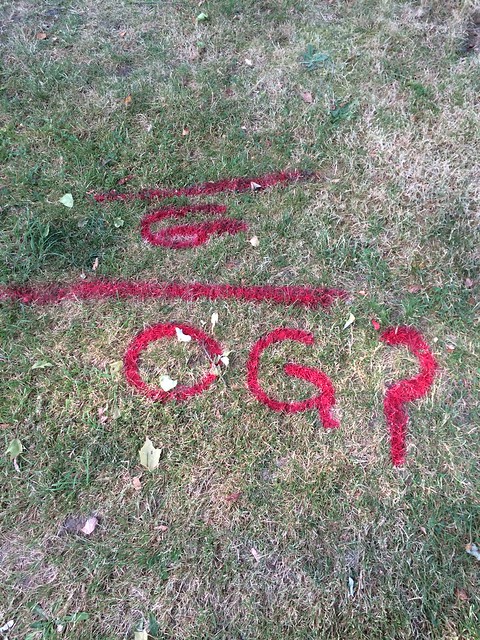 Clearly, something big is afoot. And even while the boring, adult part of my brain ponders the mystery of when the construction’s going to start and exactly how much of a hassle it’s going to be, the part of me that speculated for days over a few pieces of yellow plastic is running scenarios and trying to crack this mysterious code.

I hope the local kids know just how lucky they are… and I really, really hope that the ones who saw me taking these photos have incorporated the mysterious stranger on a bike into their skullduggery scenarios. That would make me, and no doubt Enid Blyton, very happy indeed.

1) I recently re-read another favourite Blyton series: the Malory Towers boarding school story series, all midnight feasts and pranks played on teachers. My sister had told me how much she’d enjoyed re-reading the books, but I was somewhat dubious, thinking that I’d find the outdated gender and class role aspects too grating. However, the stories were just so spiffingly good that I was drawn in all over again and read through the whole series in no time at all. Jolly good fun, and I was surprised at how much I remembered!

2) Although, staggeringly, the village is home to what I think is still North Yorkshire’s only unsolved murder! It happened a couple of years after I left to go to university, and the rumour is that the wife hired a hitman to kill the husband. No idea if that’s true or not, but you can imagine the scandal it caused – people are still speculating about it now.

"one of the sillier science bloggers [...] I thought I should give a warning to the more staid members of the community." - Bob O'Hara, December 2010
View all posts by Cath@VWXYNot? →
This entry was posted in book review, family, photos, silliness, Vancouver. Bookmark the permalink.