Just before Christmas I was asked to talk to our molecular biologists about multivariate analyses. I was reminded of this on Thursday afternoon, when I saw that I had to talk to them on Friday. “Ah, no problem”, I thought. “I can put something together in the morning. What time is the meeting? 11am? Eek.”

So, I turned up with half an idea about what I was going to talk about, and had the great fortune that the room had a blackboard. And chalk. Several colours of chalk. What fun I had! But I made the mistake of saying I would blog it afterwards, and include some resources for further reading. Well, this is the blog post, and if anyone wants to add more resources, please go ahead in the comments.

I was asked to particularly talk about 2 methods: Principal Component Analysis and Principal Coordinates Analysis. Which, in some ways, was neat because they cover two of the main mathematical approaches to multivariate analyses. I think the main use of these methods is to visualise the data, but more complicated analyses can be done using the same ideas (e.g. MANOVA and factor analysis are based on the PCA approach).

PCA is a statistical yoga warm-up: it’s all about stretching and rotating the data. I’ll illustrate it with part of a famous data set, of the size and shape of iris flowers. The original data has 4 dimensions: sepal and petal length and width. Here are the petal measurements (the different colours are different species): 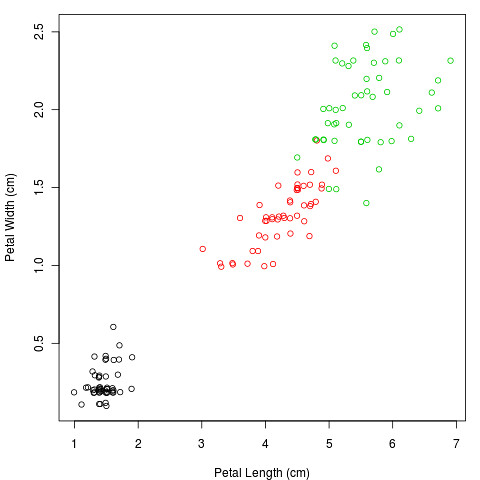 The purpose of PCA is to represent as much of the variation as possible in the first few axes. To do this we first centre the variables to have a mean of zero: 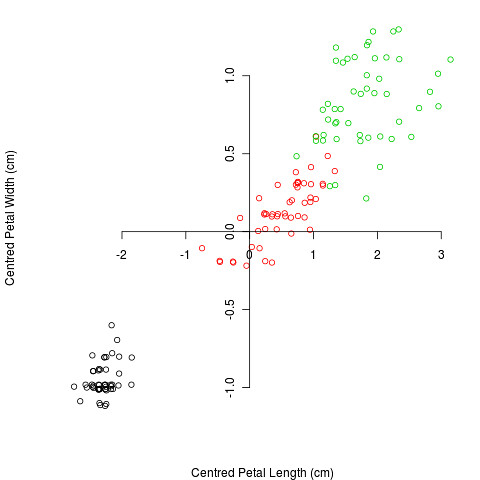 and then rotate the data (or rotate the axes, but I can’t work out how to do that in R): 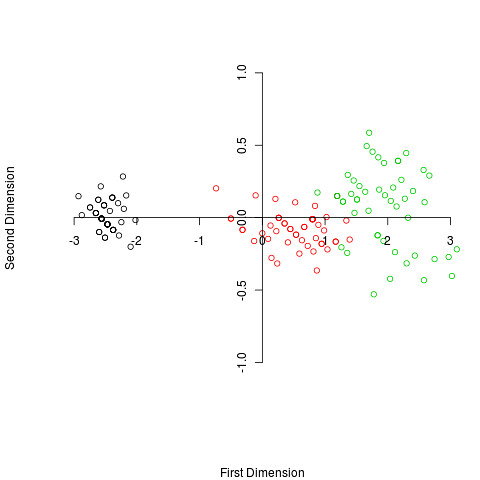 We can also ask how much each variable contributes to each dimension by looking at the loadings, e.g. for the data above we have these:

We can plot these on a graph: here we have it for the full data, with both sepals and petals: 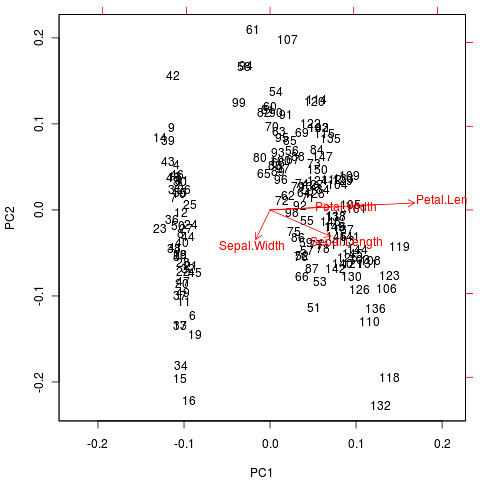 The arrows show the direction the variables point, so we can see that the petal variables are pretty much the same (i.e. there is a petal size which affects both equally). Sepal width is the only one that’s different, mainly affecting the second PC. It’s almost at 90° from the sepal length, suggesting they have independent effects.

It’s obvious, looking at the data, that one species (I. setosa) is very different, with smaller petals, and differently shaped sepals

Mathematically, PCA is just an eigen analysis: the covariance (or correlation) matrix is decomposed into its Eigenvectors and Eigenvalues. The Eigenvectors are the rotations to the new axes, and the Eigenvalues are the amount of stretching that needs to be done. But you didn’t want to know that, did you?

The second method takes a different approach, one based on distance. For example, we can take a map of towns in New Zealand:

(I’ve rotated the map, to make it easier later)

The geographical distance between the town is Euclidean (well, almost. And near enough that you won’t notice the difference). But we can also measure the distance one would travel by road between the towns. This would give us another measure of distance. Of course this may not be Euclidean in two dimensions, so we can’t simply plot it onto a piece of paper. Distance-based methods are essentially about finding a “good” set of Euclidean distances from distances that are not a priori Euclidean in those dimensions.

The way principal coordinate analysis does this is to start off by projecting the distances into Euclidean space in a larger number of dimensions. This is not difficult; as long as the distances are fairly well behaved then we only need n-1 dimensions for with n data point. PCoA starts by putting the first point at the origin, and the second along the first axis the correct distance from the first point, then adds the third so that the distance to the first 2 is correct: this usually means adding a second axis. This continues until all of the points are added.

But how do we get back down to 2 dimensions? Well, simply do a PCA on these constructed points. This obviously captures the largest amount of variation from the n-1 dimensional space.
So, for the New Zealand data if we do PCoA on the road distances, we get this:

And, not surprisingly, the maps are fairly close to each other, but not exact.

One wrinkle for the sorts of applications we were discussing for bioinformatics (and which is also important in ecology) is the notion of a distance between two data points. In ecology we work with abundances of species, and the distances between the points need to somehow scale the abundances, so that rarer and more common species . So a plethora of diversity indices have been devised, and it’s not clear which one should be used (unless one is in Canberra or New York, I guess). For added fun, some people think they’re all crap.
For me, these methods are mainly useful for visualising the data, so we can actually see how it’s behaving, and they’re not really very good for making formal inferences. But a lot of the multivariate methods for inference have the same ideas at their core, so understanding these is a good starting point.

But it’s still all about avoiding headaches by not having to think in 17 dimensions.

This entry was posted in R, Statistics. Bookmark the permalink.

8 Responses to PCa and PCoA explained