The BC Parks service does one helluva job. I’ve stayed in many provincial and marine park campsites in BC, and without exception their facilities have been excellent. Unlike some of the private sites I’ve stayed at, they don’t cram you in right next to your neighbours; each site is screened with trees to give you more privacy, and they include private beach access whenever possible. Massive kudos. 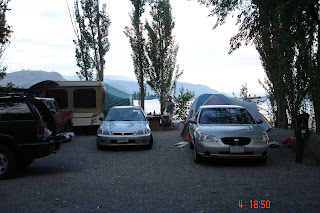 Our double site on the Friday night. 3 tents and a trailer, plus a truck, an SUV and 2 cars. It’s just as well we’re all friends! One couple moved their SUV and tent to their reserved site on Saturday, when the rest of their sub-group (comprising 3 brothers plus partners and dogs) showed up, so it wasn’t quite this crowded for the whole time. Their site was next to ours, which was great.

The Haynes Point campsite in Osoyoos is no exception to the usual standards – in fact it is now one of my favourite campsites in BC. There’s even drinking water and flush toilets, rather than the standard (and notorious) BC Parks outhouse experience. 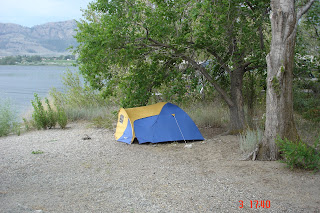 This tent was the first significant purchase that Mr E Man and I made as a couple, way back in 2003.

We originally set up camp on the beach between our two reserved sites (see photo above). Unfortunately you’re not supposed to camp there, but the site manager took pity on us and let us stay there for the first night due to the massive storm (next post). We had to dig a diversionary channel and build a barrier to protect us from the flash flood that ran through the area, but survived with nothing worse than a slightly damp duvet.

The main site was great though, with lots of room for all our gear! 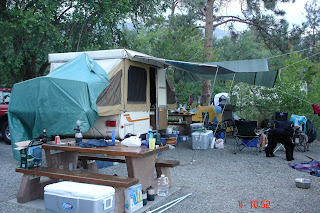 Messy, eh? It was the dog! Honest! And not all of those coolers were full of beer.

I do love our tent, but I had tent trailer envy on this trip. We borrowed this very same trailer on a previous 10 day trip around BC and it was fab, despite the leak in the canvas above our bed (which I ingeniously fixed by taping an Always Ultra to the inside). On this trip we used it to shelter from the storm on the first night, and to play board games during the rainy morning that followed.

"one of the sillier science bloggers [...] I thought I should give a warning to the more staid members of the community." - Bob O'Hara, December 2010
View all posts by Cath@VWXYNot? →
This entry was posted in camping, furry friends, personal, photos. Bookmark the permalink.

2 Responses to Osoyoos: The Campsite