CurlyLocks and the Six Bear Stories

Or: If you go down to the woods today, you’re in for a big surprise…

As I’ve mentioned before, I am terrified of bears. I am not alone – I know at least one other female European import who feels the same way. Our Canadian husbands laugh at us both, the two of them being accustomed to the fact that there are animals in the forest that can kill you, or at least maim you. (Most bear attack stories include the word “scalp”, and not in a good Head and Shoulders commercial kinda way). This is still a novel and rather unwelcome phenomenon for my friend and me though. Here are my bear stories.

__________________________________
1. I’d read a bit about bears before I moved here. My Dad had also passed on the advice he’d been given by a park ranger in the Alberta Rockies:
Park Ranger: “The first thing you need to do is try to avoid meeting a bear. We advise everyone to carry bells, so they hear you coming, and pepper spray, in case they don’t. You also need to know whether you’re more likely to encounter a black bear, or a grizzly”.
Dad: “How can you tell?”
PR: “Well, there are lots of ways you can work it out. One of them is to look for bear scat. It’s really quite different between the two species”.
Dad (unwitting straight man): “How so?”
PR: “Black bear scat is smaller, drier, and will often have berries in it. Grizzly bear scat smells of pepper and has bells in it”.
So. On my first local hike, I decided to ask my Canadian companions for their stories and advice. They gave me the usual spiel, but also spiced things up with jokes and anecdotes about meeting bears in the woods. Their jokes were pretty old,
Canadian: “If you meet a bear in the woods when you’re alone and unarmed, the best thing to do is to throw shit at it”.
Me (like father, like daughter): “What if there isn’t any shit around?”
Canadian: “Don’t worry, if you meet a bear in the woods when you’re alone and unarmed, there will be”.
but their anecdotes were somewhat better. One guy told us about the inevitable friend of a friend who’d taken a flare gun on a solo back country hike, to scare bears and cougars and summon help if needed. He did end up meeting a bear, which was acting aggressively towards him. So, he fired his flare gun at it. Of course, the flare exploded behind the bear, which then charged him in a panic.
After about half an hour of this kind of talk, the guy in front turned around and said, “erm, guys, speaking of bears…”, just as a HUGE black mammal came around a bend in the path. I shrieked extremely loudly and forgot all the advice they’d just given me. Of course it wasn’t a bear, it was a Newfie dog, and all the Canadians had an excellent chuckle at the expense of the frightened English girl. Bastards. 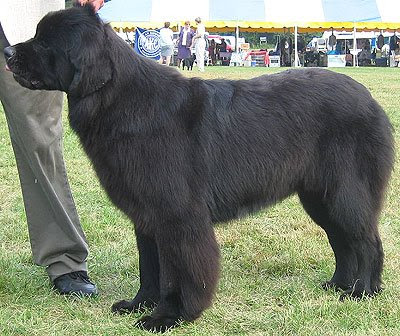 2. Another hiking story actually did happen to several friends of mine, including the fellow terrified female European mentioned above. Her group came across a black bear in the woods, and followed all the standard advice. It didn’t work, and the bear started to show predatory behaviour. In other words, it followed them.

Now, it is common knowledge that bears are bloody fast. A human can not outrun an adult bear. However, you don’t actually need to outrun the bear; you just need to outrun your friends. One of the friends on this hike is legally blind. Guess who got left behind? Of course they all went back for him as soon as they realised he wasn’t with them, and had to throw rocks at the bear to get it to back off. It got pretty close to them and they have never been so happy to finish a hike.
__________________________________
3. The closest I’ve ever knowingly come to bear-related peril was on a hike in Manning Park. Mr E Man and I were on a 10-day camping trip that was beset with rainy weather – it rained every day, but never all day. Taking advantage of a rare sunny spell, we set off into the woods on a trail that started about 1 km from our campsite.
Manning Park is famous for its bears. They’re featured on the park logo, and the on-site brew pub (did I mention that this is one of my favourite parks?) produces 3 beers: Polar (white / wheat beer), Grizzly (nut brown ale) and Black (Guiness-style stout). I should say that there are probably only black bears in the park, although Grizzly rumours spring up from time to time. So we were not surprised to see the usual warning signs about active bears in the area, and just made sure to make lots of noise as we hiked. At one point Mr E Man stopped and examined the path. I asked him what he was looking at, and he said “bear prints”. I didn’t believe him at first, thinking they were too small and were more likely to belong to someone’s dog.
Anyway. On we went, until we rounded a corner to find (drum roll):
The biggest pile of crap I’ve ever seen outside of a zoo.
It was still steaming.
We stopped dead to reconsider our options. The path wound on, past the crap and into the meadow that was the goal of our hike. Would a bear be that smart, to purposefully mark its territory in this way and prevent humans from wandering into the meadow? Or had the bear just shit in the woods, as bears do, and carried on into the undergrowth, away from the path? We didn’t know. So, we did a sharp 180 and walked back the way we’d come.
We walked a little bit faster than on the way in, and made more noise.
About halfway back to the car, and out of nowhere, I heard a LOUD GRUNT in my EAR. I shrieked (see also story #1) and leapt into the air.
It was a jogger.
He apologised profusely while I tried to calm down and Mr E Man just about peed his pants laughing. We told the jogger about the big pile of poo, and then it was his turn to laugh.
Safely (ha!) back in the campsite, we mentioned the steaming bear crap to the park ranger who came to collect our camping fee. He said “oh, yeah, it’s a mother with two cubs. She’s been hanging out in that meadow for a few days now”.
I guess bears ARE that smart.
It was an uneasy night of camping. I really, really had to pee at about 3 am, but I was too scared to go alone. Mr E Man did NOT want to get out of bed. I ended up having the fastest pee ever, right by the tent trailer, while spinning my flashlight around in circles and singing loudly.

l33t multitasking skillz – I has them.

__________________________________
4. (To understand the following, familiarity with the most striking aspect of the New Zealand accent is required; “Chair” is pronounced “Cheer”).
European women are not the only scaredy cats on Canadian camping trips. My first such trip was with a female Canadian (also present for story #1) and a male Kiwi (sorry, New Zealander). After getting well and truly hammered, during which time I tried to demonstrate my superior card shuffling skills and succeeded in spraying the deck of cards all over the campsite, we went to bed. Me and my female friend (let’s call her FF) were in her tent, and MF (I’m sure you can guess what that stands for) was by himself in his tent. Given that we were on a small and relatively well populated island, we didn’t anticipate any wildlife problems and put all the food in the tent with MF.
Not long after going to bed, there was a very, very strange noise. A low, rumbling, growling noise, coming from the woods. “Thunder”, FF whispered to me as the noise repeated. However, MF had other thoughts running through his head.
“Guys!”, came a voice from the lonely food-filled tent. “Are there any beers?”
“Nah, mate, you drank all the beers”.
“Not beers, BEERS!!!! Are there any BEERS?!!!!”
“You’ve had too many beers”.
“NOT BEERS, (pause), BUURRRRRRSSSSSS!!!! ARE THERE ANY BUURRRRRRSSSSSS???!!!!!”
The word Laugh does not adequately describe our response.
__________________________________
5. Another female European friend of mine likes to tell the story of her first night in Vancouver. The penultimate item on the local news was amused outrage at an American hockey commentator. The hapless American had apparently said something like “and this new player is from New Westminster, British Columbia. The kind of place with moose roaming the streets”.
New Westminster is actually a bustling city just outside Vancouver. 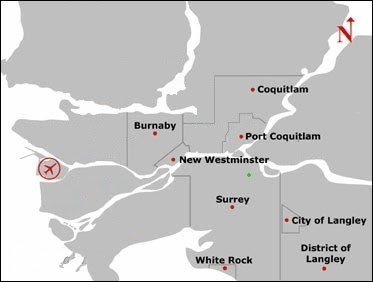 Map of the Lower Mainland. Note relative locations of New Westminster and Coquitlam. Vancouver is West of Burnaby and North of the airport.
The gist of the news item was that this commentator was an idiot. Moose! In New West! Honestly.
Next item on the news: “And finally, a young black bear broke into a Safeway supermarket in Coquitlam today. It was attracted to the bakery section by the smell of fresh bread. Staff evacuated the store, and police were called. The bear was darted and removed”.
Oh, the irony.
Coquitlam has actually had a few bear attacks recently. Remember though, these people don’t have bears in their back yard. The bears have a city in THEIR back yard. Understanding that relationship is the key to solving these conflicts.
__________________________________
6. I did actually see a black bear, once. It was in Whistler, on New Year’s Eve. Apparently there are so many year-round sources of food that they don’t truly hibernate any more. This furry terror was fishing in a creek JUST outside of the village (like, a few hundred metres from the back of Starbucks). We were crossing the bridge to go back to our friend’s family’s condo when we saw it, about 50 metres away. These friends were participants in story #2 and, unlike the gaggle of camera-toting tourists clustered on the bridge, were not inclined to hang around. We went back to the condo and called the local police, who were pretty busy with New Year’s Eve revelry but said they’d look into it. I didn’t feel threatened at the time, at all – the bear seemed completely oblivious to its admirers – but I did NOT enjoy walking back over the bridge in the dark to and from the bar that night.
My parents have seen bears from the Whistler gondola. The friend from story #5 has too, right after she’d very slowly and carefully mountain biked down that very run. I just hope the bears on the mountain itself continue to hibernate – I’m not a good enough skier to outpace an angry bear without falling over and losing my scalp.
But the best place in BC to see bears? Sightings guaranteed?
Whistler municipal dump.

I find that rather sad. 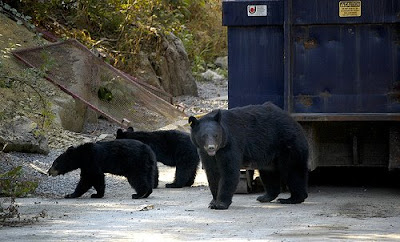 Some of BC’s finest. Photo credit

"one of the sillier science bloggers [...] I thought I should give a warning to the more staid members of the community." - Bob O'Hara, December 2010
View all posts by Cath@VWXYNot? →
This entry was posted in camping, Canada, nature, personal, photos, silliness. Bookmark the permalink.

19 Responses to CurlyLocks and the Six Bear Stories