Sound as a pound

Right, we’ve got charts, a compass, tide tables, two Swiss Army knives, bear spray, and an air horn*, and we’re off on an adventure! (Well, we’re actually off to my mother-in-law’s today, which isn’t all that adventurous, even when our nephews are there, which they are. The adventure starts tomorrow morning).

If anyone needs me I’ll be on a horse in a kayak, somewhere in Desolation Sound (so called because Captain Vancouver saw it on a bad day. Apparently it’s beautiful and not at all desolate – at least not in summer).

Oh, and our tenant’s still going to be around, so don’t even think about breaking into our house while we’re away! He’s a seriously big dude (6 foot 7 and built like a brick shithouse) who’s bodyguarded for Jean Claude van Damme and Vin Diesel, among others. He’s loaned us his bear spray; he often comes across bears in the course of his (non bodyguarding) work duties, but they run away from him. Seriously. He has an example of this kind of interaction caught on a tape from a work security camera, but I’m not allowed to post it.

He’s the big one in this photo – and bear (hah!) in mind that none of the other three guys is exactly petite. 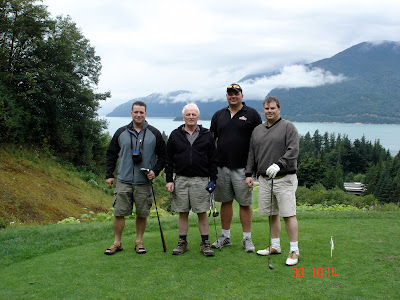 He’s also a fantastic cat sitter, and the kitties love him.

BTW, expect (slightly) more science blogging than you’ve been used to when I get back! (Don’t worry, you can skip the science posts if you’re not interested. Same goes for any other kind of post, obviously, although I assume that every single reader is riveted by the ongoing dental floss conversation).

Me: “is there much bear activity up there at the moment?”
Woman in kayak shop: “there’s one on the lawn right now! It’s looking at me through the window!”
Me: “…”

"one of the sillier science bloggers [...] I thought I should give a warning to the more staid members of the community." - Bob O'Hara, December 2010
View all posts by Cath@VWXYNot? →
This entry was posted in camping, kayaking, meta, nature, travel. Bookmark the permalink.

11 Responses to Sound as a pound