A walk in the woods: choose wisely

Posted on August 17, 2010 by Cath@VWXYNot?
Which path would you choose? 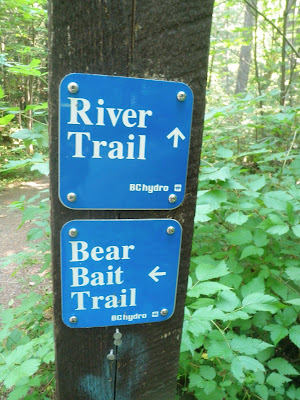 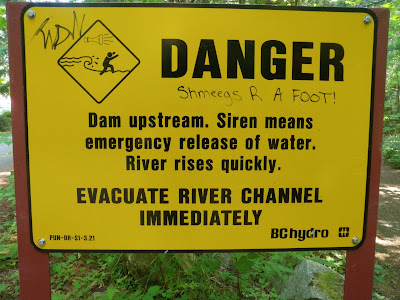 (Shmeegs?)
Would you consider the relative scariness and likelihood of this… 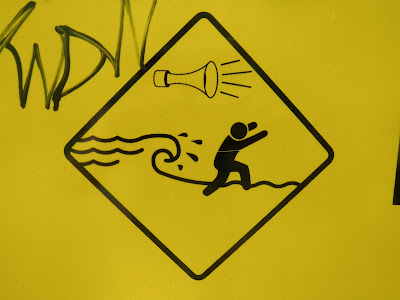 (Photo source).
Would the sight of vultures circling overhead affect your decision making? 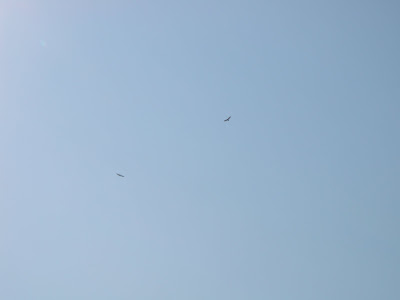 (is there a fresh bear kill in the woods, or are they waiting for the siren dinner bell?)
This was our final choice. 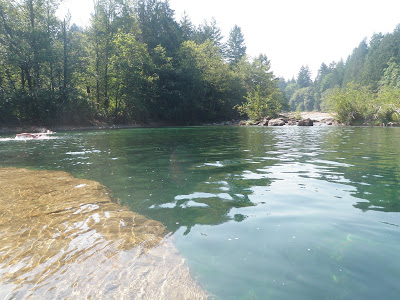 It seemed to be a good one. 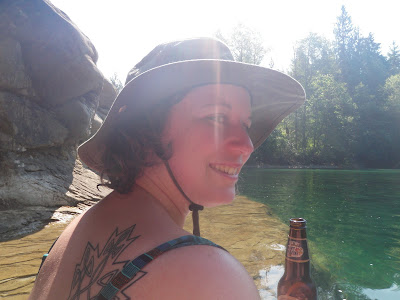 This was our Sunday lunchtime cool-down during The Big Time Out, a music festival in Cumberland on Vancouver Island. The record-breaking heat (something like 36C on Saturday – that’s 97F) may have affected my opinion somewhat, but I have to say that while it was a fun weekend and an amazing setting, 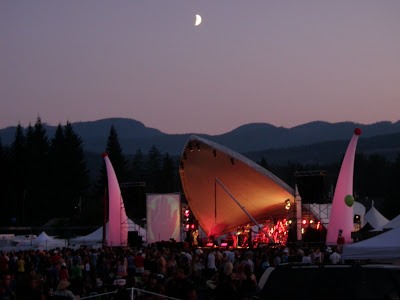 the line-up was a bit of a disappointment. Lots of “this is OK” or “oh, these guys have some decent stuff”, not much “WOW, these guys are AWESOME!”

Saturday was especially meh – the opening act was the best one all day, and while the headliners (Broken Social Scene) were also very good, the penultimate band had managed to suck most of the energy out of the crowd by the time they came on, so it was all a bit muted.

Sunday was better – the dip in the river was better preparation for the day than sweating in the tiny patch of shade thrown by our hastily rigged tarp had been the day before. But while the headliner K’naan rocked the house as usual, he didn’t have any new songs; it was essentially the same set we saw him do in Vancouver in March 2009. I guess a whole year spent on the World Cup music tour precludes much writing of new material. But still, great set, and he and a couple of other bands we saw over the two days (Ruby Jean and the Thoughtful Bees, Vitaminsforyou, Mutaytor, Kim Churchill, and especially Tambura Rasa) inspired some happy “dancing barefoot on the grass” moments in me. And as this was a very small festival, there was a really nice friendly atmosphere with lots of happy people and little kids running around all over the place. All very different to my previous music festival experiences – all in Scotland, at massive events with two stages, multiple gig tents, fairgrounds, and drunken Scots everywhere!

Overall though, my main impression of the event was of overwhelming, baking heat. Oh, except at night, when it was freezing! There was about an hour of comfortable temperature in the morning, and maybe a couple of hours in the evening, but the rest of the time was spent either sweating buckets and trying not to move, or shivering in all the clothes I’d brought. The festival and adjacent campsite were in an open field, with very little shade. We got lucky and bagged a spot next to the fence, so we pooled resources (tarps and blankets) with one of our neighbours to set up a small patch of (still baking hot) shade between the fence and our tents. The poor people who arrived later and camped in the middle of the field had no shade at all though. It’s rained at every single other music festival I’ve ever been to – on one memorable occasion at T in the Park in Scotland it got so muddy that some of the tents in the sloping campsite started to slide downhill – and that’s always miserable and muddy and nasty, but surely there’s a happy medium somewhere!

In these circumstances, we declared this frozen mango impaled on a stick 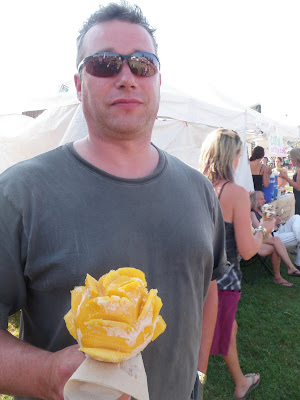 to be the best thing ever invented in the history of humanity. I literally felt new energy flooding back into my poor heat-sensitive Celtic body as I ate it.

There was also the usual lack of sleep that you get at festivals. The tents were all packed in like sardines, and some of our other neighbours were the loudest, douchiest, most obnoxious people on the site. Their conversation kept everyone in the vicinity awake from 1 – 5:30 am on the first night as one guy shared tales of all his sexual conquests in quite an aggressive, nasty way (and repeated everything at least once to make sure he’d been heard). At one point I whispered to Mr E Man “wow, that guy must have a really, really small penis”, and after that we referred to him as Douchebag McTinydick, which made us feel better – as did the news Mr E Man overheard on Monday morning that the whole group had been so hungover and tired after that night that they fell asleep in their camp chairs and missed K’naan on the Sunday!

Like I say though, overall it was a good weekend, with the swim in the river being the highlight. Oh, and we saw dolphins from the ferry on the way back, which was awesome! We might go back to The Big Time Out in the future, depending on the line-up (and the weather forecast), but our shade-sharing neighbour also gave us lots of tips about other small festivals she’s been to around BC that are apparently much better. There’s a jazz / world music festival in Kaslo (a nine hour drive from Vancouver) where the stage floats on a lake, and the crowd can wade in the lake up to their waists while listening.

"one of the sillier science bloggers [...] I thought I should give a warning to the more staid members of the community." - Bob O'Hara, December 2010
View all posts by Cath@VWXYNot? →
This entry was posted in bad people, camping, food glorious food, music, nature, photos, travel. Bookmark the permalink.

15 Responses to A walk in the woods: choose wisely