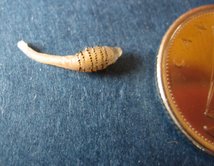 Commenters’ reactions on the original post ranged from mild (“kinda icky”) to ambivalent (“horrible. but very cool” / “utterly revolting, but sort of fascinating” / “this is both disgusting and cool”) to normal (“disgusting and disturbing” / “seriously? ewwwww….”)

Jeanne Sather, author of The Assertive Cancer Patient blog, found the post just this week, and commented as follows:

And I just about pass out when I have to remove a tick, either from my dog or from my own ankle after hiking! You geeks are made of strong stuff.

However, she then went back to her own blog and wrote a post called “A Challenge–Who Can Gross Me Out?”:

My interpretation of that post was that a bunch of smart and funny geeks were having a great time commenting on a truly disgusting parasite one of their number picked up on a trip to Belize.

The parasite has a name, Bob the Botfly, and there are photos as well.

With all due respect to the scientists/geeks, I think we cancer patients can top this.

So let’s get started. I want to hear about your absolutely most disgusting cancer experience.

I wrote about my own absolutely most disgusting science experience on my old NN blog back in April 2008; the post describes the experiment I did with an empty bucket by my side, and which resulted in me being called Dr. Monkey Bum for several months during my postdoc. Ah, memories…

Let’s hear your story! Can anyone beat Kyrsten?!

"one of the sillier science bloggers [...] I thought I should give a warning to the more staid members of the community." - Bob O'Hara, December 2010
View all posts by Cath@VWXYNot? →
This entry was posted in blog wars, career, freakishness, medicine, meta, monkeys, nature, personal, photos, science, silliness, TMI. Bookmark the permalink.