While there are some amazing kayak destinations close to Vancouver, this five day trip was our longest to date and we decided to go a little further afield. The trip up to Rockfish Kayaks in Lund involves a drive, a ferry, another drive, another ferry, and a final drive. Mr E Man usually hates to do any driving straight after his long and tiring day, but this time he agreed that we should leave after work on the Wednesday night. Luckily his Mum lives about halfway between Vancouver and Lund, so we got the familiar first ferry and some of the driving out of the way by staying with her on the first night. 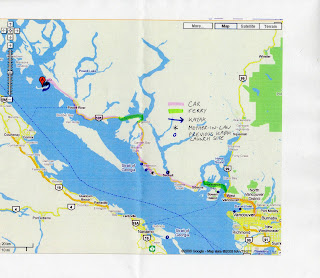 The first of several amateur map doodles I’m going to subject you to.

Thursday’s drive felt like the real start of the adventure. The Sunshine Coast is gorgeous, but familiarity breeds complacence and it was great to continue North from Half Moon Bay for only my second time. We arrived at Earl’s Cove just in time for the 9:30 ferry, which took us through some lovely scenery as we ate our breakfast. Boats are my all-time favourite mode of transport, although BC Ferries don’t contain the bars that are de rigeur on British cross-channel ferries, so we spent most of the 50 minute crossing out on deck and enjoying the ride. 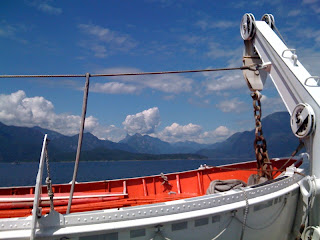 A most civilised way to travel. This photo was actually taken (on my iPhone!) on the return journey when all my muscles hurt, which explains why I didn’t get up from my shady seat on top of the lifejacket container to take a better photo that didn’t include a lifeboat.

We stopped in Powell River for groceries, and on a whim picked up a three day fishing licence and rented a fishing rod and crab trap. Upon arriving in Lund we bought the final essentials: cold beer, and plenty of ice. The girl in the rental place wasn’t exactly the passionate kayaker and enthusiastic source of destination information that we usually encounter – in fact she gave the distinct impression of being a local who’d taken any old summer job going. Having said that she had our boat and gear ready and waiting, helped us get it down to the water, attached a hose to a tap so we could fill our water containers, and was able to give us a vague recommendation that “most people prefer the South side” when we asked about good campsites on Savary Island.

We loaded up our lovely double kayak while it half-floated and half-perched on a boat ramp: clothes, pots and pans, cooking and eating utensils, stove and gas cannisters in the rear hatch; tent, sleeping bags and air mattress in the centre; food, beer, wine and ice in the front; pumps, charts, spare paddles, sun screen and water bottles strapped on top; and big heavy water containers between our legs in each cockpit. (We took way too much water, but it’s better to have too much than not enough. Ditto toilet paper – no camping trip was ever ruined by having too much of it).

And then we were off!

The first little stretch was the usual launch site obstacle course of boats and their wakes. This time we remembered to look backwards to see what the harbour would look like when we returned – failure to take this simple precaution has caused navigational confusion in the past. You can, if you choose, kayak in literally a foot of water and hug the shore for safety, crossing only at the narrowest point, but the sea was calm and we decided to head more or less straight for the Eastern tip of the island. 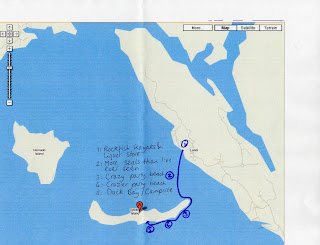 A more detailed amateurish map doodle
I don’t usually like open water crossings too much, but this one was nice – great weather, calm water, not too long, and full of the joy of being back in a fully loaded kayak after far too long on land. We saw our first seal – a sleek doglike head in the water off to our left – after about ten minutes, and it was quickly joined by some friends. In fact at one point there were more and more heads popping up like whack-a-moles around the boat until there were at least a dozen surrounding us, probably more. There must be some good fishing in that channel!
We rejected the first couple of beaches on the South side of the island as too crowded with people, cabins, and tents. The third beach (Duck Bay) was devoid of permanent structures and completely deserted, so we dodged the many underwater rocks to pull up close to a driftwood shelter that someone had made, complete with a sign declaring “Cutler House – Visitors Welcome”. One lone kayaker turned up a few hours later and camped about 200 metres away – he turned out to be a pretty nice guy who joined us for drinks around our campfire. But that’s a post for another day! 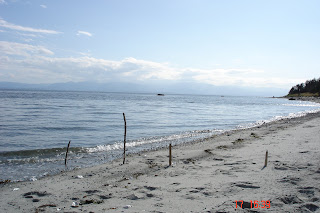 It is very important to know the time and level of the high and low tides, for optimal tent placement and launch times. Why carry the boat all the way down to the low tide when you can wait for the water to come up to you?! Unfortunately we forgot to pick up a tide table on this trip and had to improvise with a series of sticks and a cell phone clock display… oops!

"one of the sillier science bloggers [...] I thought I should give a warning to the more staid members of the community." - Bob O'Hara, December 2010
View all posts by Cath@VWXYNot? →
This entry was posted in camping, drunkenness, food glorious food, kayaking, nature, photos. Bookmark the permalink.