We loved our Savary Island campsite and decided to just hang out and enjoy it for a full day. Here’s a little spinarama video – the sand fleas were indeed jumping all over the place, but only in one localised spot. And at least there were no mosquitoes, unlike at our second site.

The water was pretty damn cold, so our planned swim turned into more of a brief cleansing splash. Luckily the sun shone all day so we dried off pretty quickly. We made ourselves a hearty brunch that we shared with our neighbour, John,

and had a nice walk along the beach, checking out the neighbours as we went: 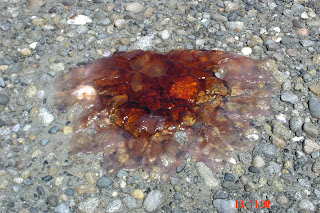 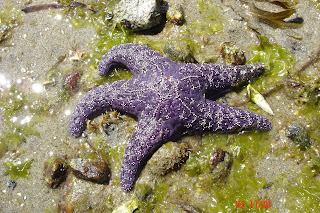 Mmmmm, pretty. We saw literally thousands of purple and orange starfish, stranded on the beach or above our heads on steep rock walls, waiting for the high tide.

There were hundreds of baby crabs in the shallows, so we decided to try our luck catching their bigger relatives in the rented trap. We paddled out towards some submerged rocks and dropped the tuna-baited trap into the water, with an empty Gatorade bottle attached to act as a floating marker. We paddled off and played with the rod and reel for a bit, with absolutely no success at all. We pulled the crab trap up after a while, found it to be empty, and set off paddling aimlessly again.

At this point we got distracted by the loud sound of *something* repeatedly jumping out of the water and slapping itself back down. We identified the source of the sound and splashing, and headed towards it, but we couldn’t get close as it kept moving away from us. We thought at first that it might be a dolphin, but were later told that it was probably a sea lion stunning its fishy lunch. Whatever it was, by the time we got back to the rock where we’d dropped the trap, the Gatorade bottle was completely gone. Seriously. We looked for it for ages, before deciding it could have been dismantled by one of the nearby seals trying to get at the tuna.

After a couple of games of crib, it was time for dinner and a fire.

Dinner: same as the night before, we could only get a big pack of smokies and damn they were tasty! Plus a nice tetrapak of French cabernet merlot.

Fires are almost my favourite thing about camping. Even our most miserable trip (in the Sechelt Inlet), when I dropped the kayak on my foot, got stung by a bee, burned myself with hot cooking oil and it rained from the time we arrived at the campsite until we got back to the rental place the next morning, was made tolerable by the time spent snuggling with Mr E Man around the campfire that kept us warm all evening. This beach fire brought John back for a beer and a smoke, and also attracted some random Brooklyn guys staying at a nearby cabin, who gave us marshmallows and fetched fresh wood in exchange for sharing our fire. 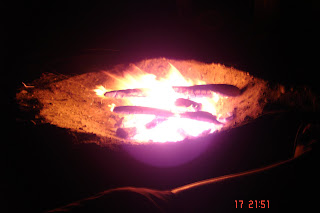 Dig a pit in the sand, add newspaper, cardboard food wrappings and driftwood, and unleash your inner pyromaniac.
The night’s entertainment was provided by a full orange moon rising over the town of Powell River. Seriously, who needs TV?! 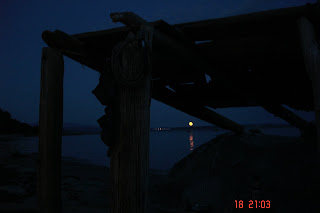 Moon rise through the driftwood shelter. Also my new screensaver.