We’ve just got back from yet another night under canvas. (In fact I’m at that stage of a hangover where all I want to do is eat and eat and eat, and I’m trying to resist). As fun as the weekend was, I don’t really count it as a proper camping trip. We pitched out tent next to our friends’ 5th wheel, which they park at Cultus Lake (barely an hour out of Vancouver) for 5 months a year. The campsite is great for kids, and our friends’ 6 year old son loves it, but I don’t really like being crammed in next to RVs and waking up to the sound of trucks on gravel not 3 feet away from my head.

Proper camping involves waking up somewhere like the Copeland Islands to the sound of waves lapping on the shore, birds singing, and arbutus leaves rustling in the breeze. Getting up and making breakfast over a propane stove

and chatting to the few fellow campers and boaters who wander by. Playing some cards and eventually deciding to take the kayak out to try and catch some lunch. 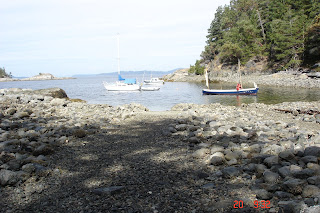 Thankyou, BC Parks, for clearing the big rocks away to make this makeshift boat launch. It made our lives so much easier.

Pootling slowly around the entire marine park and the surrounding waters, dropping the crab trap occasionally with no success whatsoever. Playing with our jigging pole, and – in my first ever serious attempt at fishing – catching a fish on my second cast! I don’t know who was more surprised, me or the fish. (Actually it was probably Mr E Man, who confessed later that he thought I’d snagged some kelp in one of my frequent displays of clumsiness). Mr E Man caught one too, and dealt with all the cleaning and gutting, although I’ve promised to let him teach me this essential Canadian skill at some point.

Video taken from a small hill on our island. The film cuts out as the camera faces our campsite.

and should end with a delicious one-pot dinner

Dinner: cheese and asparagus ravioli with garlicky bacon and a jar of spinach/tomato sauce, bottle of local Merlot.

and a snuggle with your sweetie.

The next and final day dawned to the sight of two campers frantically trying to get packed and ready in time for the high tide. We were a little late, but luckily didn’t have to carry the boat too far. We paddled back to Lund by the fastest route, having illustrated John Steinbeck’s point that while some journeys keep on going long after you reach home, others end while you’re still on the road*. In our case, thoughts of home inspired us to dip and pull and unpack and hop in the car without much in the way of pauses or reflection. But the memories of Savary and the Copelands will stay with us until the next long trip.

For the record, here are the things I miss the most when I’m camping, in order:

And here are the things I miss the most about camping when I come home:

*From Travels with Charley, one of my all-time favourite books.

3 Responses to Lund Day 5-6: Pootling Around