You know how I said I’m not a big fan of open water crossings? Well, Day 4 contained a doozy. We haven’t measured our journey properly yet, but we’re pretty sure it was our longest paddling day ever (at least in terms of distance – we’ve spent more hours on the water before but didn’t get as far, thanks to brutal currents and winds). Luckily the crossing was calm again, and we got to spend the afternoon in a much more interesting and pleasant kayaking environment.

We timed our launch quite well, meaning that we got up early and had everything packed and ready to go just after the high tide. We decided to break the journey to the Copeland Islands by stopping in Lund for lunch and to pick up more beer essential provisions. There was hardly any wind, and the sea still looked nice and calm, so we decided to take the long way around Savary. 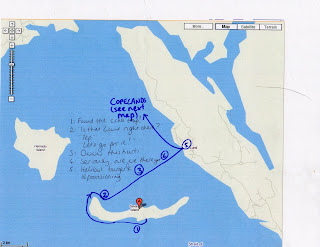 I do like to circumnavigate things, it makes me feel more adventurous.
The rest of the South side of the island was just as lovely as the parts we’d already seen – sandy beaches, trees, eagles, envy-inducing holiday homes. We even found the Gatorade bottle and crab trap that had been MIA since the day before – right where we’d left it, which was very confusing. How the hell did we miss it the day before when it was so visible this time?! It was a higher tide than when we’d lost it, so it wasn’t just a matter of the float being dragged under and then reappearing on the surface as the water level dropped. This conundrum is still bothering me!

Anyway. As we rounded the island’s Western tip we started to follow the original plan of hugging the coast, but then realised that the group of houses on the horizon were actually Lund. Mr E Man was getting hungry (breakfast did not meet his usual standards), and asked me if I’d mind if we just went for it. I eventually agreed, and we started a super-fast paddle directly towards the harbour.

The crossing wasn’t bad, as these things go, but my awesome power stroke (using my core muscles to pull myself up to the paddle, rather than pulling the paddle back towards myself using my arm and shoulder muscles) aggravated my recurring sacro–iliac joint problem. Ouch. It’s still a bit sore now actually. I started whining about it when we were about two thirds of the way there, and called more rest stops than usual. It was lucky for us that the conditions were so great, I wouldn’t fancy stopping that often in heavy rollers! I was exhausted by the time we reached Lund, having resorted to arm and shoulder work rather than using my core muscles, and was more than ready for a nice cuppa tea and some restaurant food.

Lunch (at the Lund hotel): halibut and shrimp burger with fries (I earned them), tea, beer (hey, I was on holiday).

By the time we’d finished eating and restocked the beer cooler front hatch, I was feeling much better and raring to go. I’d even managed to make my sacro–iliac joint click a few times, which always seems to help but is probably terribly bad for me. We headed North this time, into the Copeland Islands Marine Provincial Park. 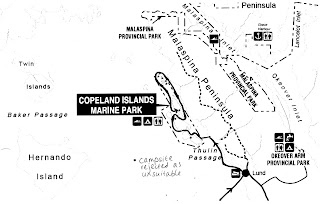 Hooray for hugging the coast! And more circumnavigation! And for scanners that suddenly stop recognising colour for no apparent reason!

I can’t possibly recommend this destination highly enough. It was just amazing, and is now my favourite kayaking location (for the record it replaced the Northern Gulf Islands, between Vancouver Island and the mainland). Some of the park’s islands have steep rocky sides that towered over our heads, covered in starfish and plants; others have shallow gravelly beaches, studded with oyster shells. There were arbutus trees everywhere – I have included the embarrassing fan girl tag to come out of the closet about my adoration of these trees and the silky-smooth red wood that’s revealed by their signature peeling bark. I have an overwhelming urge to touch these triumphs of evolution every time I see one. 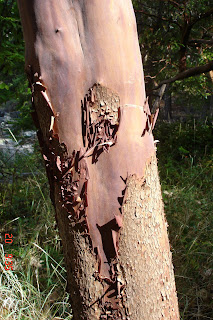 We toured basically the entire park looking for a good campsite, and eventually found one with a suitable beach that was not too crowded. It even had an outhouse! This feature made me very very happy, which proves that I need to toughen up if I want to call myself a wilderness camper. 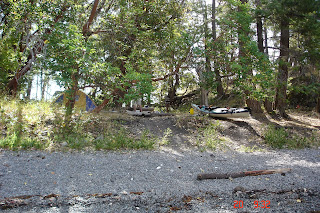 Again the water was too cold for a long swim, but we gave it our best shot. By high tide the water reached the log at the bottom of the photo above, so we decided not to have a campfire due to the risk of embers flying up into the overhanging arbutus trees. A forestry official came around the next day to say that although a campfire ban wasn’t in place just yet, it was imminent (it actually started later that week), so could we please not have a fire, or keep it small if we did have to have one? When we told him about our decision the night before he replied that he was heading off to find people who weren’t as thoughtful as us!

Dinner: Thai red curry, beer, and a local Gewurtzraminer that was quite pleasant but a bit too sweet. A massive hit. I fried up some onion, mushrooms and red pepper, stirred in a packet of red curry sauce, added a can of coconut milk, waited until it was hot and then tipped in two packets of instant noodles, topped it up with a little water, and cooked it all up together until the noodles were soft and the sauce had thickened. Camp cooking at its best!

We went to bed earlier than on Savary Island, due to the lack of a fire and moonlight as much as the tiredness. And man was I tired! I usually wake up at least two or three times during the night when camping, but this time I slept like a log. Mr E Man’s loud snoring is very comforting in these situations as I’m pretty sure it scares the bears away. And I am TERRIFIED of bears, despite Mr E Mans insistence that there wouldn’t be any on such a small island. (Dude, they can SWIM! Although I’m sure they’re unlikely to bother given the temperature of the water and long odds of getting enough to eat). I have an amusing bear / camping story that I will tell in some other future post…

"one of the sillier science bloggers [...] I thought I should give a warning to the more staid members of the community." - Bob O'Hara, December 2010
View all posts by Cath@VWXYNot? →
This entry was posted in camping, drunkenness, embarrassing fan girl, food glorious food, kayaking, nature, photos. Bookmark the permalink.