In So Long, And Thanks For All The Fish, the fourth of five books in the Hitchhiker trilogy by Douglas Adams, our hero Arthur Dent travels to California to meet a man called Wonko the Sane. Wonko’s house is inside-out, with brickwork and a nice garden inside (or “outside the Asylum”, as he calls it), and nice wallpaper, carpeting, and outward-facing furniture against all the outside walls. Wonko explains the purpose of his inside-out house as follows:

“I finally realized that the world had gone totally mad and built the Asylum to put it in, the poor thing, and hoped it would get better.”

The words that inspired this final realization are displayed “inside” the house, above the door that leads into the Asylum, to discourage Wonko from entering. They read:

“Hold stick near centre of its length. Moisten pointed end in mouth. Insert in tooth space, blunt end next to gum. Use gentle in-out motion”.

“It seemed to me,” said Wonko the Sane, “that any civilization that had so far lost its head as to need to include a set of detailed instructions for use in a packet of toothpicks, was no longer a civilization in which I could live and stay sane.”

Now, I think old Wonko might be slightly off-base here. I mean, I once had to teach my Dad, an intelligent and educated man, how to use dental floss because he professed not to know how it worked. So maybe we do need instructions in our packets of toothpicks.

However, I do agree that the world has gone insane and needs to be put in an asylum of some kind.

I had my own final realization yesterday, in the camping equipment aisles of Canadian Tire. While Mr E Man perused collapsible coolers and gazed longingly at hunting knives and fishing gear, I entertained myself by looking at all the little plasticky gadgetty things.

Now, I’m a sucker for gadgets. I’ve bought the Scoop’N’Strain and the Grip’N’Flip off the TV – but those are actually useful things that serve a unique purpose. So I did have to restrain myself slightly in the camping equipment aisles, with my usual refrain of “that’s cool, oh but I don’t need it, but it might come in handy, oh right but PLASTIC IS TEH EVULS!!!”.

Until I spotted my Wonko the Sane item.

At that point I abandoned all restraint and whipped out my iPhone to take a photo for your amusement: 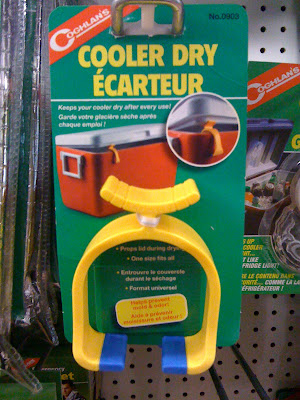 That’s right, folks – someone has seen fit to design, patent, manufacture, and market a piece of plastic that has the sole purpose of propping open your cooler lid while the inside dries. No longer must you improvise with wads of newspaper, sticks, stones, pencils, or any of that other primitive nonsense – what are you, a savage??!! Nope, you must buy this item that will outlast you, your species, and probably your planet in a landfill somewhere….

…because the world has gone stark raving bonkers.

If anyone needs me I’ll be moving all my furniture outside and planting trees in my living room.

"one of the sillier science bloggers [...] I thought I should give a warning to the more staid members of the community." - Bob O'Hara, December 2010
View all posts by Cath@VWXYNot? →
This entry was posted in camping, environment, freakishness, photos, rants, shopping, silliness. Bookmark the permalink.