What I Did On My Staycation – Part II

The heavy rain that greeted me first thing in the morning made me exceedingly glad that I’d braved the windstorm to visit Stanley Park while the sun was still out the day before. However, an hour or two later the bus driver greeted me with a cheery “did you bring the sunshine with you?”, and by the time we reached my stop (in the scary heart of the Downtown Eastside) the glare of bright winter sun off the wet streets was almost blinding.

My destination was the Dr. Sun Yat-Sen Classical Chinese Garden,  a delightful oasis in the middle of downtown, which I’d never visited before. 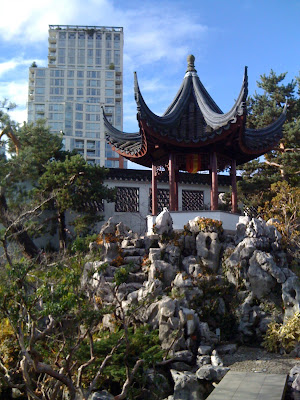 I took KJHaxton’s advice and arrived just in time for the guided tour. There were only four of us there – me, a woman from New Zealand, and a couple from Italy. The Italians seemed to have difficulty understanding our guide’s accent, and soon started talking quietly to each other in Italian, which was a bit annoying, even though the first part of the tour wasn’t exactly stellar. Our guide carried a folder containing various printouts (some from Wikipedia) in plastic protector pockets, and rifled through it at an alarming rate, showing us each picture as he got to the corresponding part of the talk. He spent more time telling us about the high speed train network in China, and how we should visit China just to take the train, than about the garden itself – and I started to wonder if he was on commission.

However, things quickly improved as we finally moved out of the entrance hallway and into the garden itself. It really is lovely, and it was great to hear about the reasons for each design feature (it’s all about contrasts). 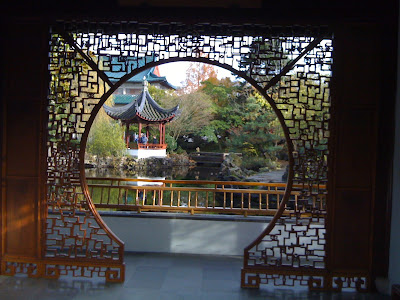 Contrast between square and circle 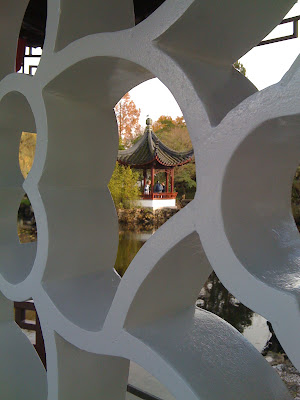 The pool was made deliberately cloudy, to create better reflections
After the official tour we warmed up with tea and dodgy calligraphy, and then I (and the Kiwi and one of the Italian guys) continued to wander around the garden, chatting quietly (I provided them with several suggestions for their remaining days in Vancouver!) It was so peaceful, a great change of pace from city life. Definitely recommended!
I wandered into the main downtown core, had a late lunch at Trees cafe (site of one of my worst first (or indeed any) dates of all time, but I hold no grudges), tried on (but didn’t buy) a couple of pairs of shoes, then SkyTrained out to Burnaby to meet Mr E Man at our friends’ house for the 4pm Canucks game.
Thursday

This time, cycling was the wrong decision – the heavens opened about five minutes after I left home, and I was drenched and freezing before I’d even made it onto the sea wall. I turned left this time, rather than right, and pedalled as fast as my frozen, wet legs would take me along the southern edge of False Creek. The foul weather was mitigated somewhat by the opportunity to be the only person on the stretch of path that goes through the shiny new Olympic village development (it was too cold to stop and take photos, sorry), but only a little bit.

I paused to cast a lingering, longing look at the lovely warm Granville Island public market, but kept going, and was soon locking up my bike outside the Vancouver Maritime Museum.

This wasn’t part of my original staycation plan, but I’d spotted a Groupon a couple of weeks earlier, and thought why not? I love boats, having been brought up watching old naval battle movies with my Mum, and the museum has a great one as its centrepiece. The St. Roch was an RCMP supply ship that was the first to sail the Northwest Passage from west to east (second overall), and the first to completely circumnavigate North America (see, I was paying attention!) I love stories of polar exploration just as much as I love boats, so I greatly enjoyed the video about the boat’s voyages and especially the chance to get on board, poking around the crew quarters and climbing ladders all over the place. 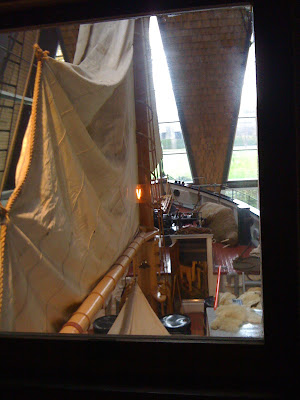 View from the bridge of the St. Roch. Note mangy stuffed walrus on the starboard deck. The stuffed huskies  (out of shot) were also rather tatty.

The boat exhibit was very well done, but I have to admit that the other display cases didn’t do much for me at all – lots of models of old steam ships, that kind of thing. The museum was definitely worth visiting at the reduced Groupon rate, but I’m not sure I’d have felt the same way if I’d paid full price!

I thought again about heading straight for the cozy warmth of Granville Island, but decided to persevere with my cultural education and head to the adjacent Museum of Vancouver instead. Mr E Man and at least one other long-time Vancouver resident claimed to have never heard of the place, but I can confirm that it does indeed exist (tucked away in Vanier Park, in the same building as the Space Centre / Planetarium), and has a rather fetching crab sculpture outside: 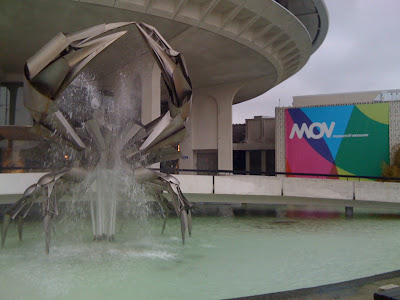 That’s a fountain, not the prevailing weather conditions, although admittedly it was hard to tell the difference

I was really, really cold at this point, and didn’t want to stay too long, but I really liked the museum. The rotating exhibit was on local food production (backyard veggie gardens, beehives and chicken coops), which was quite interesting, but I liked the permanent exhibits much better. They had photos from when the site of the Marine Building downtown was literally an old growth forest, and then more photos, videos, and artifacts from that period right up to the 1970s, which was exceedingly cool (there aren’t many cities with a full photographic record of their development from trees to skyscrapers!) I particularly enjoyed the wobbly film taken from the back of one of the old street cars – oh how I wish we still had them!

The exhibits were pretty comprehensive, and didn’t gloss over the terrible treatment of the city’s First Nations, Chinese, and Japanese inhabitants over the years (there’s more comprehensive coverage of the city’s original First Nations inhabitants at the excellent Museum of Anthropology, which I’d been to several times before and so didn’t visit on my staycation). Overall I thought it was very well done, and good value for money. I’ll be back, some day when I’m not quite so cold and wet! 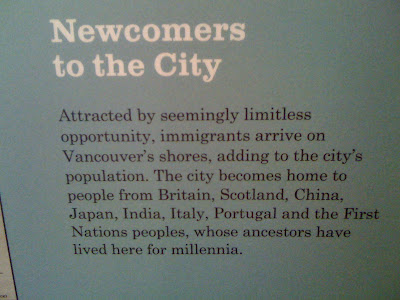 Britain AND Scotland???!!! I don’t see that working…

Onwards (in the still-pouring rain) to Granville Island, where I treated myself to fish and chips and a hot cup of tea and felt sooooo much better. I picked up more dinner ingredients before hauling my poor self through the pelting rain and up the steep hills to home, which is where the heart bathtub is.

For dinner, I roasted a Cornish game hen with fingerling potatoes, some adorable mini squash, and the rest of the asparagus and red pepper. We had some lovely olive bread with it, and some yumtastic chocolate brownies afterwards, as we watched the snow start to fall.

If I could shop at Granville Island every day, I’d cook more often, eat more healthily, and be completely broke.

I decided I’d had enough culture for one week, and went shopping instead. I trawled all my favourite vintage stores on Main Street, and although I didn’t find the perfect burgundy leather jacket that I’ve had in my mind’s eye for a couple of years now, I did manage to find a funky sweater and two very nice, very gently used winter coats (one grey, one tweedy one that I can actually wear with brown pants without looking like an eejit) for a combined total of $82. I suspect the grey one might actually be a guy’s jacket, despite being bought from a women’s clothing store (the shoulders are ever so slightly boxier, and the arms are ever so slightly longer, than usual, and the buttons are on the wrong side), but hey, it looks good on me IMNSHO and it cost $35, so who cares.

I met up with Mr E Man halfway through the day for a tasty lunch at one of our favourite restaurants, The Reef, and then again in the late afternoon for tea and cake at The Grind. I love this place – the front part is just your average coffee shop, but the back room is a cozy haven full of mismatched schoolroom-type furniture and is a great place to hang out and read or write. Before Mr E Man arrived I wrote a proper letter to my sister (who STILL doesn’t have internet at her apartment in London, where she’s been for over a year now. I am Not Impressed), but didn’t manage any other writing.

In fact, not doing much writing was an ongoing theme of my staycation, and the only disappointment (I thoroughly enjoyed the rest of it and have considered starting to play the lottery so I can bum around parks and museums and coffee shops and watch early east coast hockey games all the time). This was mostly because of Mr E Man unexpectedly being off work – I left home later each day, and came home earlier, than I would have if he was working his usual 11-12 hour days, leaving less time for writing between my visits to all the galleries, parks, and museums. I really enjoyed what little writing I did do, and I’d like to build more writing time into my regular schedule. If I’m home with Mr E Man I tend to get distracted by conversations, TV, the internet, and our traditional long Scrabble and card games, so I think I need to set aside some designated time each weekend (or maybe on the occasional work day lunchtime) to leave the house and go and write somewhere else. I think I made enough of a start on a couple of projects to get me over that initial hump and keep me working on them… time will tell!

Overall, I highly recommend a staycation. Especially if it’s in Vancouver, which (as I said in my last post) I have fallen in love with all over again. It was so relaxing, and so much cheaper (and more eco-friendly – I went everywhere by bike or public transit) than any other vacation I’ve ever taken! I wanted a second week, to do more writing and exercise than I managed to fit into my busy sight-seeing schedule, but it was not to be, and it’s back to waking up in the dark and braving the snow and ice on my way in to work.

I do enjoy my job (mostly), but, well, it aint no staycation.

"one of the sillier science bloggers [...] I thought I should give a warning to the more staid members of the community." - Bob O'Hara, December 2010
View all posts by Cath@VWXYNot? →
This entry was posted in art, career, cycling, food glorious food, personal, photos, shopping, snow, travel, Vancouver. Bookmark the permalink.

9 Responses to What I Did On My Staycation – Part II