Life in the Middle West 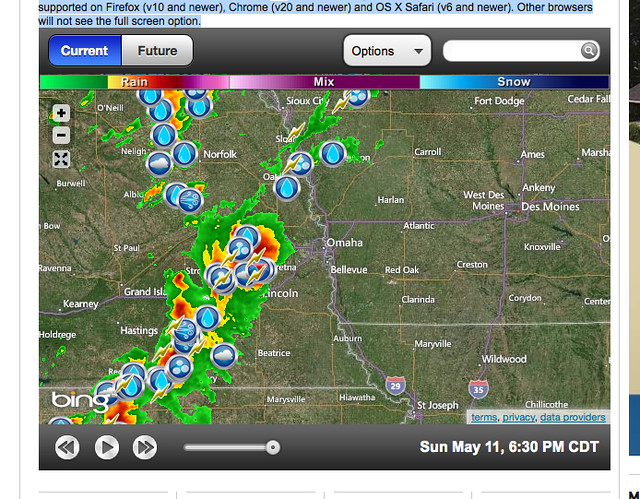 I’m watching the storm predictors on the news, with tornado reports and wall clouds about 30 miles to the southwest, and bemoaning our decision to miss our daughter’s Carmina Burana performance with 350 vocalists at Omaha’s Holland Performing Arts Center. These are tough decisions that need to be made, probably a half dozen times per severe-weather-season. But leaving a 12 year old home alone with incoming storms that have knocked down buildings on route to Omaha is not an option. Nature, it seems, has its own agenda, and doesn’t include man’s artistic preferences.

Update: Tornado warning and we are hunkered down in the basement…

I am a Professor of Biochemistry and Molecular Biology at the University of Nebraska Medical Center in Omaha, Nebraska where I mentor a group of about 10 students, postdoctoral fellows and researchers working on endocytic protein trafficking. My first lablit novel, "Matter Over Mind," is about a biomedical researcher seeking tenure and struggling to overcome the consequences of growing up with a parent suffering from bipolar disorder. Lablit novel #2, "Welcome Home, Sir," published by Anaphora Literary Press, deals with a hypochondriac principal investigator whose service in the army and post-traumatic stress disorder actually prepare him well for academic, but not personal success. Novel #3, "A Degree of Betrayal," is an academic murder mystery that is now in press! All views expressed are my own, of course--after all, I hate advertising. http://www.stevecaplan.net
View all posts by Steve Caplan →
This entry was posted in Uncategorized and tagged Carmina Burana, hail, lightning, music, performing arts, severe weather, thunderstorms, tornados, warnings, weather. Bookmark the permalink.