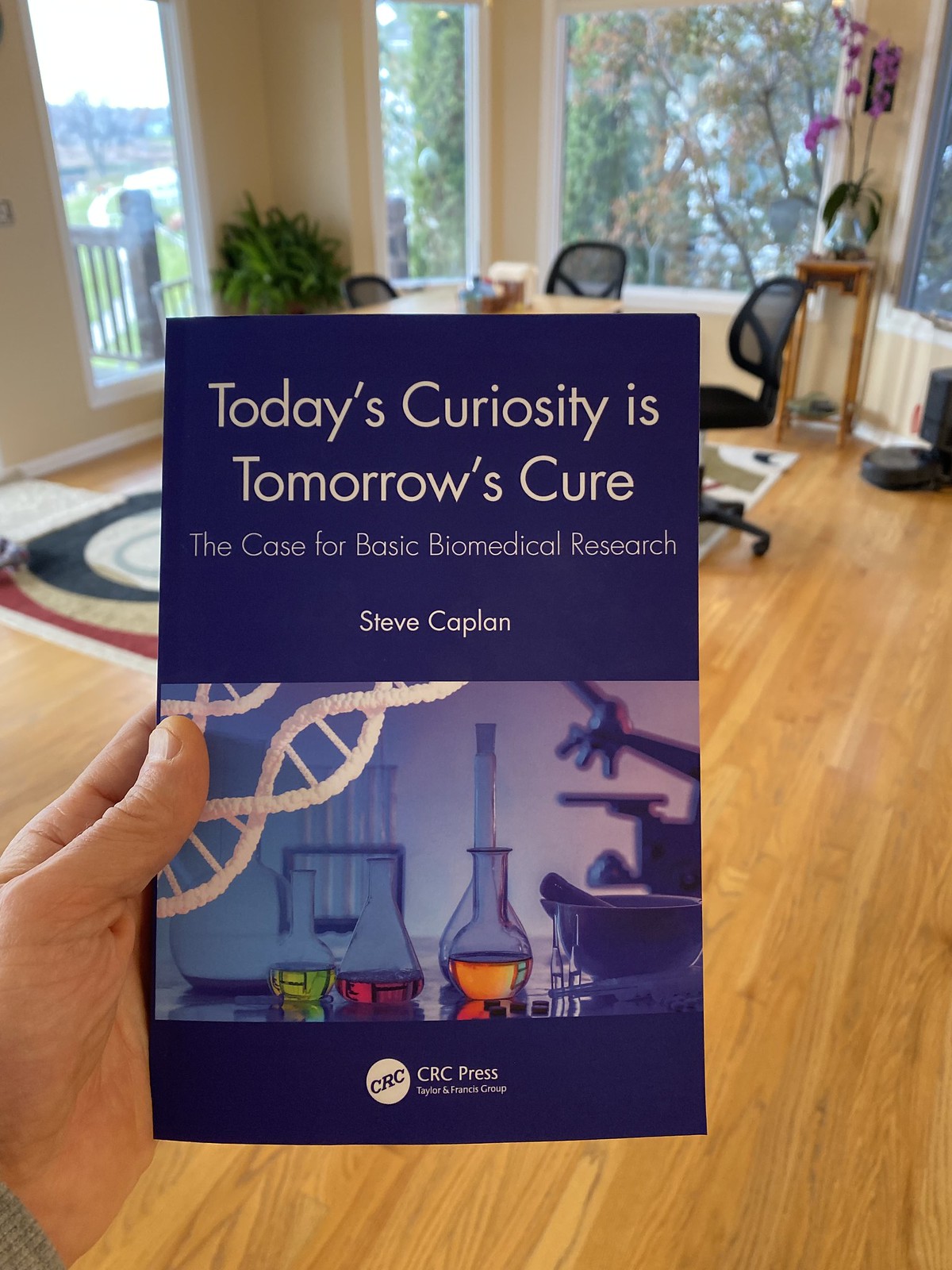 Today’s Curiosity is Tomorrow’s Cure: The Case for Basic Biomedical Research is now officially published and available from Routledge/Taylor & Francis/CRC Press on their website, from Amazon and all the regular book sellers, including Barnes & Nobles, Waterstones, etc. I’m not sure what this means, as this is an academic book, but it’s been a #1 hot new release on Amazon (the paperback version) alternately in “Biotechnology” and “Medical Research” as well as “Cell Biology” and “Biochemistry” these past 10 days since being published.

It’s been on my mind for the last 5 years, and in active writing since early 2020. For the last 12 months it’s taken up every free minute of my spare time, the writing, editing, tweaking, modifying, re-editing, figures, references, glossary, proof reading ad nauseam–so that now that the book is finally published, I feel a little lonely, a little lost, and not quite sure what to do with myself. Fortunately I have a new young dog to keep me busy…

Overall, it’s been a marathon of sorts–a marathon I started as a book to lobby for basic biomedical research, but in the course of writing became enamored with the history behind some of the greatest discoveries. I really loved the researching and writing of each of the 24 chapters in the book, and the biggest take-home message is that “it takes a village of scientists” and usually decades between the initiation of a great discovery until some clinical fruits might be gained from the research.

Another important point relates to perspective. Researchers are continually trying to “sell” the science and highlight the “significance” and “impact” of the research. But historically, it hasn’t been an easy task to always predict what impact a discovery might have in the future. For example, Chapter 24 addresses the discovery of the green fluorescent protein (GFP)–arguably one of the most impactful findings that has had a monumental influence on the course of research’s allowing scientists to study proteins, organelles and living organisms more readily. However, when the protein was first isolated from jellyfish in 1962 by Osamu Shimomura and his colleagues, the initial publication was a rather understated paper in a modestly-ranked journal–not really providing a hint of the massive impact the GFP protein would later make.

Indeed, what is “impact?” I once was asked to show a group of donors some microscopy studies on a confocal microscope, perhaps 15 years ago. After a lot of preparation and working to explain things to laypersons, I realized that the group was entirely fixated on—the notion that the microscope had two computer screen (at the time this was a relatively new thing) and they were amazed that I could drag images and icons from one screen to the next one seamlessly. The actual biology held no interest for them. And thus, “impact” can be a very subjective concept. Just ask any scientist whose paper has been rejected without review for “insufficient impact…”

In any case, for anyone interested in the stories leading up to the great discoveries, or in search of a holiday gift for a scientist, please check out this book. There’s even a discount for my friends… 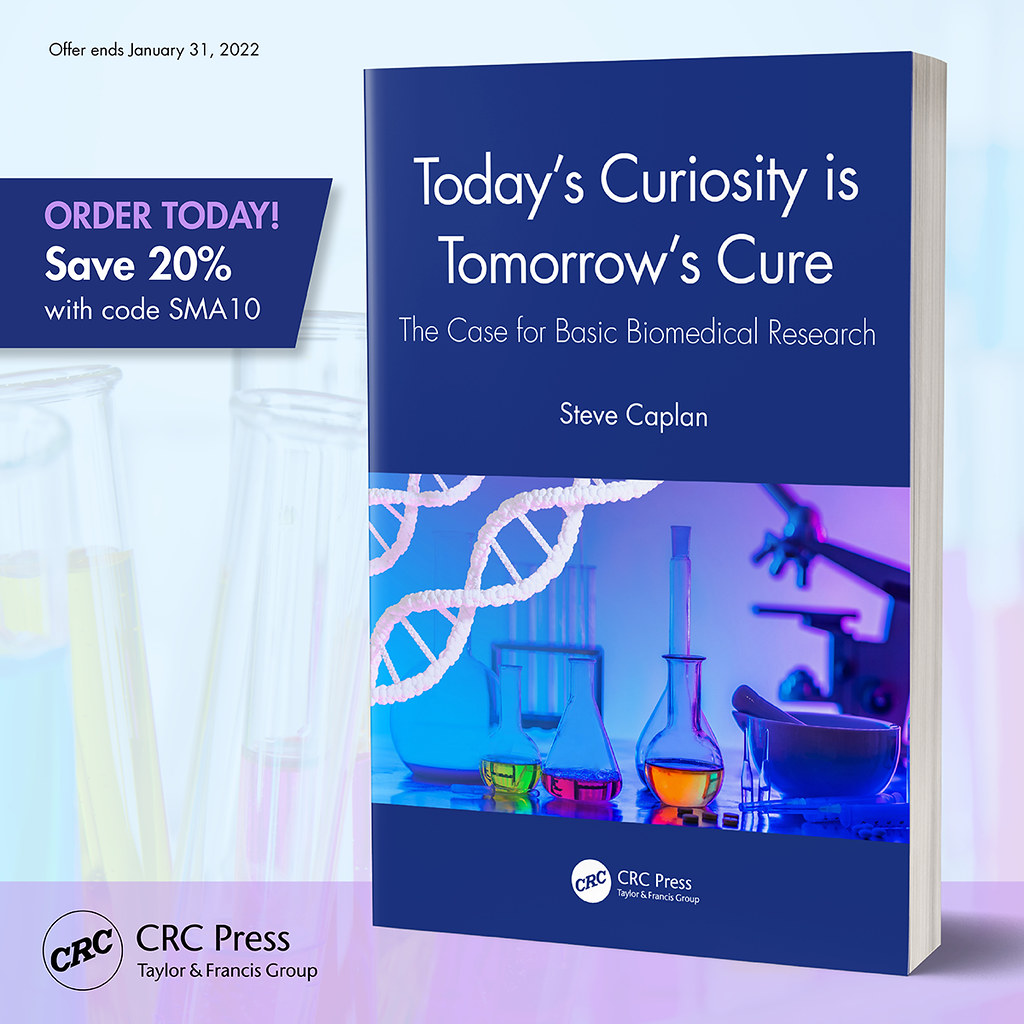 I am a Professor of Biochemistry and Molecular Biology at the University of Nebraska Medical Center in Omaha, Nebraska where I mentor a group of students, postdoctoral fellows and researchers working on endocytic protein trafficking. My first lablit novel, "Matter Over Mind," is about a biomedical researcher seeking tenure and struggling to overcome the consequences of growing up with a parent suffering from bipolar disorder. Lablit novel #2, "Welcome Home, Sir," published by Anaphora Literary Press, deals with a hypochondriac principal investigator whose service in the army and post-traumatic stress disorder actually prepare him well for academic, but not personal success. Novel #3, "A Degree of Betrayal," is an academic murder mystery. "Saving One" is my most recent novel set at the National Institutes of Health. Now IN PRESS: Today's Curiosity is Tomorrow's Cure: The Case for Basic Biomedical Research (CRC PRESS, 2021). https://www.amazon.com/kindle-dbs/entity/author/B006CSULBW? All views expressed are my own, of course--after all, I hate advertising.
View all posts by Steve Caplan →
This entry was posted in Education, research, science and tagged angiogenesis, antibodies, basic research, DNA, genetic code, genetic engineering, GFP, great discoveries, penicillin, proteins, RNA, science history, stem cells, ubiquitin. Bookmark the permalink.