Important Takeaways from “The Discovery of Insulin” for Today’s Scientists 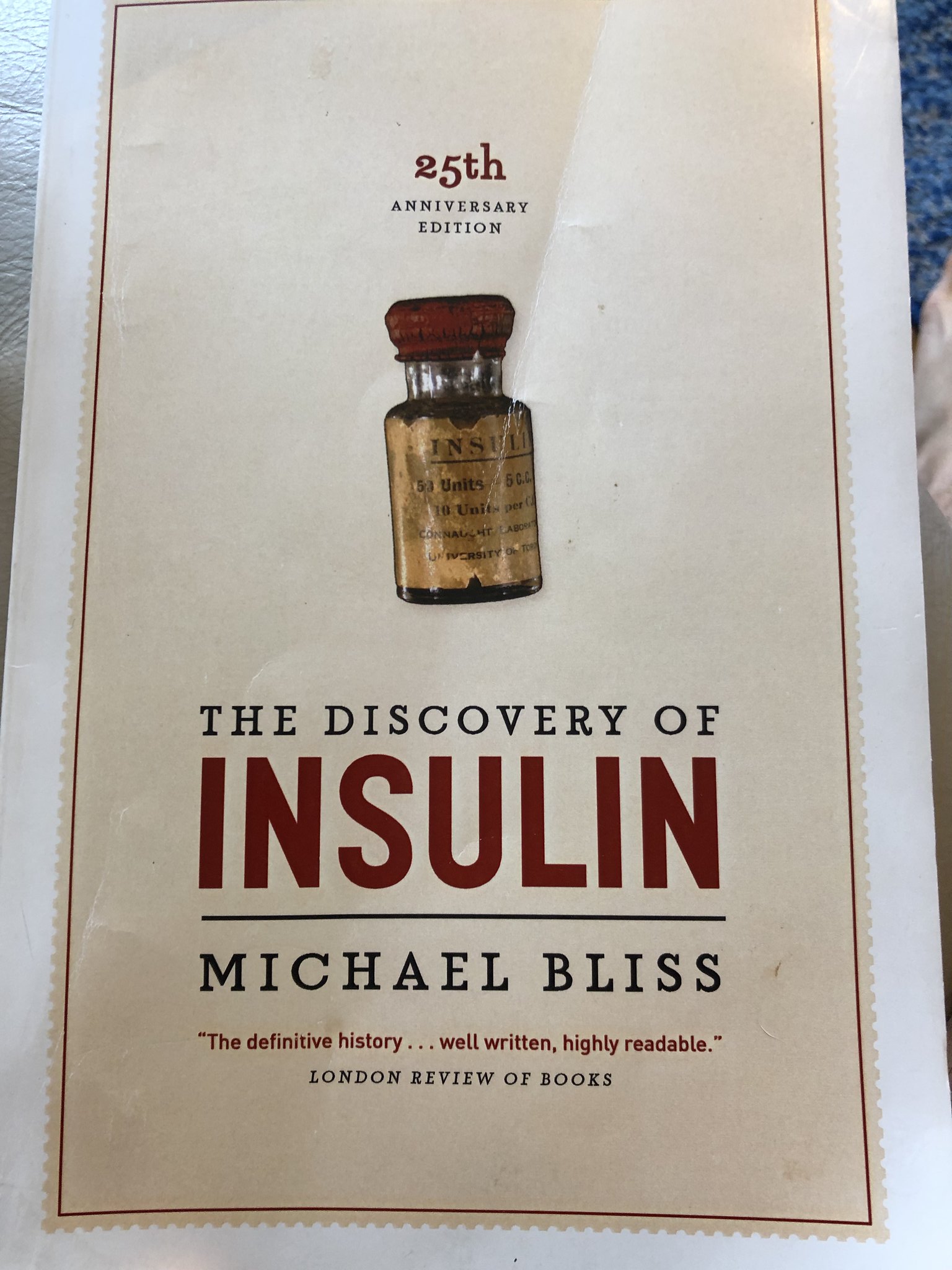 Back in 2013 I visited the University of Toronto for a seminar and was given a very special gift by my gracious hosts: a copy of “The Discovery of Insulin” by Michael Bliss, which tells the fascinating story of the people and research that led to the finding that pancreatic extracts contain biologically active material that reduces blood sugar levels, and paved the way for the identification of insulin. Unfortunately, I managed to bury the book on my bedside table underneath an avalanche of other books, and completely forgot its existence over the last 6-7 years. Fortunately, a recent excavation led me to rediscover the book, and I have just completed reading this rich and interesting story of an important chapter of science history.

The discovery of insulin did not emerge from a vacuum; instead, for many years researchers and physicians understood that the pancreas likely held “secretions” that might be able to alter or regulate carbohydrate metabolism and thus control blood sugar levels. The Bliss depiction, a historian’s very carefully documented and thoroughly analyzed sequence of events, clearly shows that previously, a number of researchers in Europe and also in the US had tried valiantly (but overall unsuccessfully) to use pancreatic extracts on patients. The difference was that in Toronto in 1922, nearly a century ago, work mostly propelled by Banting, Best, Macleod and Collip, led to an actual pancreatic extract that could be used successfully on diabetic patients, some of whom were almost starved to death on diets with as little as 500 calories a day—the only known way of somehow extending life for Type 1 Diabetics at the time. A very uplifting portion of the book tracks some of the patients whose lives were saved and extended by the discovery.

In the book, Bliss tells the story of how physician/surgeon Frederick Banting, a shy and not particularly articulate World War 1 veteran was frustrated with his attempt to establish a clinical practice in London, Ontario. He had few patients, rent and debt were piling up, and his childhood sweetheart and fiancé was not pleased. As told by Bliss, Banting was looking for change, and he found two potential options: 1) to do some research on an idea he had related to pancreatic extracts, or 2) to go on an expedition with a group of people up north as a medical officer. Apparently unable to choose between these radical changes in career, he flipped a coin—and thus decided to go on the expedition. According to Bliss, Banting would have gone up north if the expedition leader hadn’t called him at the last moment to say that they decided not to include a medical officer in the group. And thus, by default, Banting ended up coming for the summer to the lab of Macleod for his research.

By all descriptions, Macleod was a very competent and qualified physiologist with broad knowledge of carbohydrate metabolism and physiology in general. Based on records of his early conversations with Banting, he was not impressed by Banting’s knowledge of physiology or of the current literature regarding pancreatic extracts. Depending on whom one believes, he either cautioned or discouraged Banting, but nonetheless agreed to give him space and resources, as well as a student, Charley Best, to do the work. Banting’s initial hypothesis was that other researchers had been unsuccessful in obtaining pancreatic extracts with the “internal secretion” that later became known as insulin, because he thought that the “external secretions” (all the gastric enzymes produced by the pancreas) were digesting the insulin, rendering it inactive. His plan, therefore, was to ligate and tie off the ducts that generated the “external secretions,” thus allowing those areas of the pancreas to atrophy, and leaving the remining pancreas (and its extracts) more likely to maintain an active “internal secretion/insulin.”

The book exquisitely details the methodologies employed by Banting and Best, with some guidance, cautionary and sometimes more directly useful, by Macleod, over the summer of 1922 and on to December 1922. The work was done primarily with dogs, rabbits, and later pancreases obtained from slaughterhouses. At some point when there was a modicum of success in obtaining preparations with potential benefit for actual patients, Macleod introduced Banting and Best to a biochemist colleague from Alberta who was in Toronto at the time, and his expertise in working out biochemical methods for extraction of the active insulin-containing extracts seems to have further propelled the project forward.

Bliss highlights scientists who nearly 100 years ago, just as they do today, bickered, and fought about the scientific credit for their research. In truth, as per Bliss, assigning credit was no simple matter. Each researcher involved had certain contributions, but for various reasons, it appears that no one person was wholly responsible. In the end, a contentious Nobel Prize decision was made to award the honor to both Banting and Macleod, whereas Best and Collip were not included. Banting was outraged that Best did not receive his due credit, claiming that “Macleod never did a single experiment.” Macleod, on the other hand, being the head of the lab, not only provided the resources, some of the key ideas for successful extraction, and the biochemist Collip to the team, but supported and promoted the research through his talks and help with articles (where he did award equal credit to Banting and Best). So while Banting gave half of his award money to Best, Macleod was upset that Collip did not receive his recognition, and he shared half of his prize with the latter researcher.

I highly recommend that every student in the biomedical sciences read this book (and not bury it under other books as I did!). Importantly, there are some key takeaway points that I think will enrich every scientist and anyone interested in science and discovery:

1)   For many years I have been a strong proponent of basic research, maintaining that (in particular) the serendipitous discoveries are historically often the most significant. And while one might argue that in this instance, a clear “translational research goal” was defined and led to the big advance, the discovery of insulin, I will argue that again it is basic science in the background that is, in part, the unsung hero of this story. Why did Banting and his colleagues succeed in Toronto in 1922 whereas 10-20 years earlier, Zuelzer and others remained unsuccessful? My read on that from Bliss’ book is that by 1922, advances in basic science had reached a level whereby assays had been worked out to accurately and efficiently measure various biochemical parameters, such as the level of glucose in the serum and urine of model animals and humans. While Bliss did not explicitly highlight this, my impression is that these technological advances in basic research techniques clearly provided the backdrop for the discovery of potent pancreatic extracts that contained active insulin.

2)   As noted above, good science does not emerge from a vacuum, but rather from a series of bricks built carefully one on top of the other. What this means, for some of us scientists, is that not only is it valid to work logically and methodically on the next little step or advance, but that this is a necessary thing to do to ultimately lead to big discoveries. In other words, dream big, keep the big discovery or “home-run” or ultimate goal in sight, but know that mostly science advances by baby-steps, and slow, incremental advances. In the book, Bliss himself noted that the discovery of Insulin was a question of time—if not in 1922, then within a year or two or five at the very most—because the technology was ripe.

3)   Many critics of Banting attacked him because his hypothesis that ligating the pancreas really never led anywhere (and even some of his conclusions in the early experiments were not particularly accurate), and that essentially, the real advance came from the alterations in the preparation of the extracts, ultimately leading to active insulin. The message here, in my view, is that the significance of the biological/biomedical question being addressed is often more important than the specific hypothesis.In fact, many times the hypothesis being proved wrong or irrelevant, can be just as important, as long as researchers keep their eyes open and are focused on discovery. As statistician George Box once said, “All models are wrong, but some are useful.”

4)   I do not want to detract from the great discovery by Banting and co-workers, by spending too much time on some of the points Bliss made about his having little knowledge of the literature, both at the start and even in later stages of the research. Instead, I would point out that he chose what was at the time a very challenging project where researchers with more experience than he had had not succeeded in the past. One reason for the discovery was his motivation to succeed, and such motivation is often a prime factor in scientific success.A word of caution, however. I once attended a seminar years ago by the late Judah Folkman, a pioneer in the field of angiogenesis, and he talked of 7 years of hard work by a postdoc in the lab who had made an important discovery of an angiogenic factor. Folkman said: “There is a very fine line between demonstrating tremendous dedication to a scientific goal and simply being pig-headed.” He is correct; and that fine line runs right through the issue of whether the postdoc or researcher is ultimately successful or not! If so, the researcher goes down in history as a brilliant committed scientist, if not, simply as pig-headed…

5)   While research and technologies have changed dramatically in the last 100 years, researchers have not. The same intrigues and egos and paranoias that existed in 1922 are still around today. And I expect they will be 100 years from now, too!

I am a Professor of Biochemistry and Molecular Biology at the University of Nebraska Medical Center in Omaha, Nebraska where I mentor a group of students, postdoctoral fellows and researchers working on endocytic protein trafficking. My first lablit novel, "Matter Over Mind," is about a biomedical researcher seeking tenure and struggling to overcome the consequences of growing up with a parent suffering from bipolar disorder. Lablit novel #2, "Welcome Home, Sir," published by Anaphora Literary Press, deals with a hypochondriac principal investigator whose service in the army and post-traumatic stress disorder actually prepare him well for academic, but not personal success. Novel #3, "A Degree of Betrayal," is an academic murder mystery. "Saving One" is my most recent novel set at the National Institutes of Health. Now IN PRESS: Today's Curiosity is Tomorrow's Cure: The Case for Basic Biomedical Research (CRC PRESS, 2021). https://www.amazon.com/kindle-dbs/entity/author/B006CSULBW? All views expressed are my own, of course--after all, I hate advertising.
View all posts by Steve Caplan →
This entry was posted in research, Reviews, science and tagged Banting, basic science, Best, book review, Collip, discovery, insulin, Macleod, Michael Bliss, pancreas, research, takeaway, Toronto. Bookmark the permalink.