What makes a dog tick? No pun intended…

Having adopted Ginger as a 4 year old Vizsla-Labrador retriever mix less than a year ago from an animal rescue organization in Nebraska, I cannot even remember what life used to be like pre-arrival of my loyal retriever-pointer-and all around shadow. This is the second dog I’ve lived with, and while I loved her predecessor, he had a nasty temper and had to be kept away from kids. 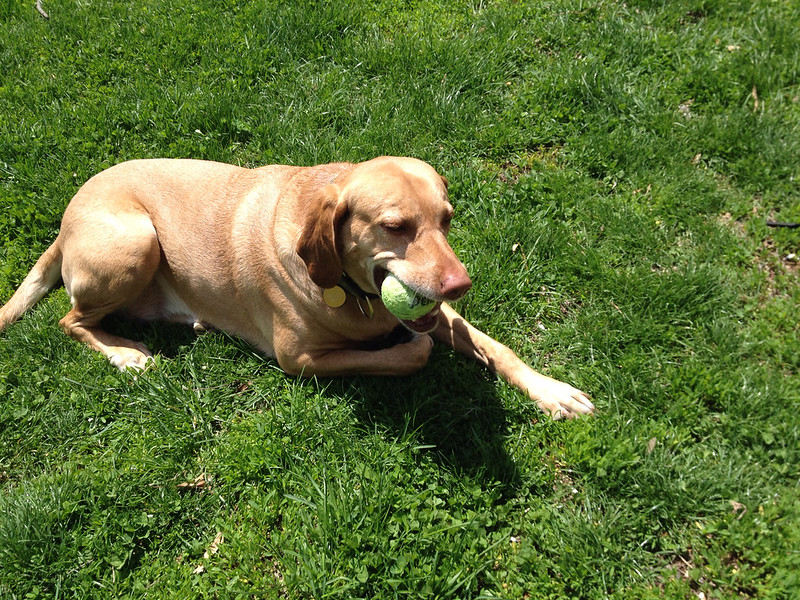 Ginger, on the other hand, is the sweetest most even-keeled, friendly and affectionate canine that I have ever had the pleasure of meeting, not to mention living with.

I have long been interested in animal behavior, and particularly (after my former dog’s tempestuous behavior) in understanding why dogs behave as they do. I had heard some theories – such as why dogs sometimes swivel 360 degrees prior to lying down (or having a bowel movement) – supposedly an instinct that protected them from unwanted attackers in the wild – but very little about what makes dogs tick.

For this reason, when I spotted the audio book “Dog Sense” by Prof. John Bradshaw of Bristol University at my local library, I grabbed it. This blog has been long in the making, since I’ve been listening with my kids in the car on the way to school each morning – and it’s only a 10 minute ride to the first drop-off.

Now, having arrived at the end of the audio book, I first found that I have already been “scooped” with a nice piece written by Kate Kellaway for The Guardian. Oh well, lower the impact factor and shoot for Occam’s Typewriter – we scientists are used to this…

Bradshaw’s main point, and a good one at that, is that there are many misconceptions of dog behavior (and subsequently, how dogs should be trained) that have no real scientific basis. For example, Bradshaw notes time and time again how wrong the “dominance model” is for dog behavior. In this model, many trainers (among them celebrity dog trainers) continually push the notion that dogs seek to show dominance over their humans, and that any perceived weakness by the human is thus exploited by the dog to achieve a more prominent position in the hierarchy of the family (i.e., wolf pack).

Just as one of a multitude of examples, there is a common myth that a human needs to teach his dog that he should always enter a door or passageway before the dog. That it is a question of essential leadership and dominance. Now, while it’s fine to use this as a method of training the dog, Bradshaw maintains that the issue is essentially rubbish. Laying out his argument (albeit somewhat repetitively, particularly at the beginning), I certainly agree with his synopsis.

Bradshaw explains the process of domestication of dogs, and how this has radically altered their behavior from that of the wolf – despite the nearly identical DNA that they share. This makes sense; after all, our own DNA is nearly identical to simian DNA. He also points out that today’s domesticated dogs are continuously and mistakenly compared to the American Timber Wolf (Gray Wolf), when essentially dogs evolved from the European wolf, which is now practically extinct. Finally, Bradshaw points out that the many studies on wolf packs – in which hierarchy and dominance are perceived as playing such crucial roles – are all based on artificially created wolf packs in zoos and enclosures. The reason that these studies are flawed (at least as a microcosm for real wolf behavior), claims Bradshaw, is that the wolves in these packs are seldom related – and therefore they are far more aggressive to one another and this does not reflect the more harmonious relationships that occur within wolf packs in the wild.

Bradshaw points out that humans often mistakenly anthropomorphize dog behavior. Anger, for example, is an emotion that dogs are unlikely to be capable of feeling. Dogs are more likely anxious or fearful – and in both cases can show aggression that humans often interpret as anger. But Bradshaw notes that dogs are not really equipped to feel anger.

On the other hand, dogs do “love.” This is based on experiments that show the release of oxytocin, a hormone that in humans has been related to feelings of “love.”

Bradshaw details a variety of very interesting experiments that explain how dogs use their senses (primarily smell and hearing) to great advantage compared to humans, and describes the scientific basis for dogs keener sense of smell (the relative number of neurons and receptors allocated to this sense in the dog brain). He also explains the differences in dog and human eyesight – that dogs do not differentiate well between red/brown/orange, but see better at night (four times better than humans) and sense motion better than humans.

One of the fascinating studies done shows that dogs like to play with humans as much or more than they do with other dogs. In fact, dogs will always try to win a tug-of-war (for a rope) with another dog, but if they sense a human will stop playing with them during the same game, they will sometimes allow the human to win! Dogs know humans can be poor sports…

For the most part, I agree intuitively with Bradshaw’s conclusions, but there are a few of them that – at least based on my close personal interactions with my two dogs – I disagree with. Anecdotally, but nonetheless.

For example, Bradshaw discusses at length the idea that dogs have a poor sense of time. He explains, therefore, that upon coming home and finding that the dog overturned the rubbish bin, there would be no point in punishing or berating the dog. The dog would not be able to connect his action to the punishment that occurred hours, or even minutes after the deed. Bradshaw notes that cases where dog owners claim that their dogs roll over and become submissive when berated are not evidence of understanding; that the dogs are merely doing this to please their owners, without connecting their submission to what they did earlier. This may be so, but I don’t altogether agree .

Ginger, whose single weakness is for forbidden chocolate (toxic to dogs) and other such human treats, occasionally riffles through unlocked trash cans, dumping them in search of such treasures. She greets me happily and excitedly as usual when I come home and will follow me around the house as I take off my jacket and put down my back-pack. But when I enter the specific room where the naughty deed was done, she will not enter, and instead roll onto her back submissively.

Now, to me, this indicates that Ginger knows that what she did was wrong (perhaps not “why,” but she knows it’s forbidden). She knows and remembers full well what she has done – not my expression or posture or any other human giveaway, because she often won’t even come to the door of the room as I’m heading down the hall, and I haven’t yet seen the damage. And Ginger’s predecessor (Rodrigo) did the same thing, although he made more of a mess, and it seems that he did it to spite me, rather than search for remaining food tidbits. Yes, he was a piece of work!

The other concept that I disagree with is Bradshaw’s claim that dogs do not feel a complex emotion such as jealousy. He maintains that in order to be jealous, a dog would need to have a more developed sense of self. Anecdotally, again, but Rodrigo was an intensely jealous dog. If I patted the coffee table and said “Good dog,” he would become jealous. If family members hugged or patted each other – he would push in between. And if anyone – *shudders at the thought* – ever touched his tennis ball? Let’s just say I hope the person can count to ten without requiring all of his fingers to do so… Ginger, however, is not a jealous dog, and has a more noble, altruistic spirit.

All in all, for those interested in learning more about canine behavior, I would warmly recommend “Dog Sense.”

I am a Professor of Biochemistry and Molecular Biology at the University of Nebraska Medical Center in Omaha, Nebraska where I mentor a group of students, postdoctoral fellows and researchers working on endocytic protein trafficking. My first lablit novel, "Matter Over Mind," is about a biomedical researcher seeking tenure and struggling to overcome the consequences of growing up with a parent suffering from bipolar disorder. Lablit novel #2, "Welcome Home, Sir," published by Anaphora Literary Press, deals with a hypochondriac principal investigator whose service in the army and post-traumatic stress disorder actually prepare him well for academic, but not personal success. Novel #3, "A Degree of Betrayal," is an academic murder mystery. "Saving One" is my most recent novel set at the National Institutes of Health. Now IN PRESS: Today's Curiosity is Tomorrow's Cure: The Case for Basic Biomedical Research (CRC PRESS, 2021). https://www.amazon.com/kindle-dbs/entity/author/B006CSULBW? All views expressed are my own, of course--after all, I hate advertising.
View all posts by Steve Caplan →
This entry was posted in Education, research, science and tagged animal behavior, anxiety, canine, dog, dog sense, dogs, Ginger, jealousy, john bradshaw, labrador, pointer, retriever, training, vizsla. Bookmark the permalink.

5 Responses to What makes a dog tick? No pun intended…