Reading into a major lifetime change?

Last Sunday, I celebrated the publication of “A Degree of Betrayal” by doing a book signing at Omaha’s best book store, “The Bookworm.” My son baked brownies, my editor prepared a short passage for me to read as an introduction, and I planned exactly what I would say. And I said none of it. 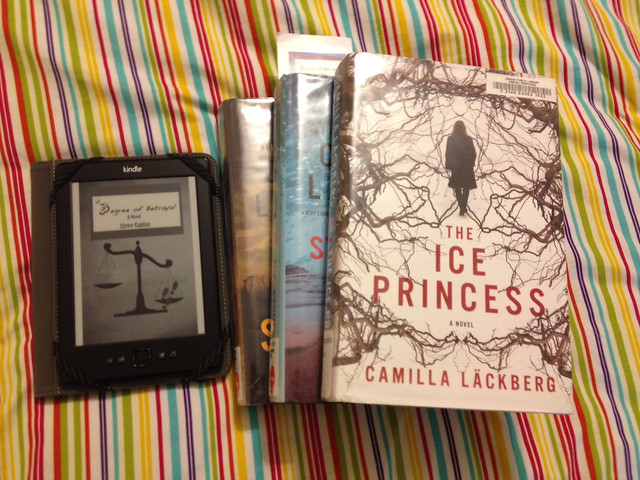 Kindle: My sales ratio of 5:1 (Kindle to Paper) is inversely proportional to the weight of paper books to Kindle.

Essentially, including my family, there were fewer than a dozen people and only one sale. The owner did, however, tell me that since advertising the signing a few weeks earlier, there had been a steady number of clients that came in and specifically asked for (and purchased) the book. But nonetheless, not a highly successful event.

Fortunately, a career in science has prepared me well to accept failure, and has made my skin as thick as the bark on a redwood tree. But speaking of trees, paper book sales hardly tell the whole story.

As it turns out, all three of my novels are selling steadily, if slowly, as Kindle books. In particular, my first (and only self-published) novel, Matter Over Mind, is something of a rare phenomenon. I’ve long lost track of the number of overall sales, including from the trunk (or ‘boot’) of my car, signings, via Amazon, and especially Kindle (where rarely a month goes by without at least a smattering of sales), but I would have to guess it’s between 1500-2000, not including several hundred Kindle copies that went for free when I tried that promotion. Published in 2011, this one has outsold my other two added together, and continues to do so. And I really think that while it’s a great story (*claps self on back*), A Degree of Betrayal leaves Matter Over Mind in the dust…

The point of this mono-blog is only partially self-congratulatory; what I really wanted to point out was the steady movement to e-books, which I find even my public library has begun to loan. After all, my own sales are 5 e-books to every paperback.

I have always been in love with books; their texture and feel, smell, and just simply their physical presence has always reassured me. Books were (and are) an escape; but an escape in which I always find that I learn more about human nature. As a child (and even as an adult, but not to the same degree) I used to concentrate and immerse myself so deeply in books that I would not hear the telephone or doorbell, and would not respond to someone shouting my name from two feet away. It was well known that a family member would have to stick his hand in front of my eyes to get my attention when I was reading. I wish I had maintained that degree of concentration today, although I occasionally can feel something of it when I am very focused.

So it was with a great deal of ambivalence – and even anxiety – that I finally gave in and purchased the cheapest Kindle version (dedicated e-reader with no frills) for $69.

What motivated me to do this? My primary reason was one of convenience and weight. I travel a fair bit, and often find myself toward the end of a book as I start to pack. What to do, take 2 books for an overnight stay? But these are often heavy, 600 page hardcover books from the library! But the weight of the books is always outweighed by knowing that there’s nothing worse than being stuck at an airport or on a flight without a good book to read. To me, it’s a disaster. And worse, with my frequent bouts of insomnia, finishing a book at the beginning of a “white night” is definitely not something to look forward to. And so I took the plunge.

With the Kindle now up and running, it really is something of a miracle for a book lover. Instant access, storage of books that will keep me busy for months at a time, and all smaller and lighter than a tiny single paperback. For now, I am still reading my heavy library hardcover books, but by the time I get back from my next meeting this summer, I don’t know whether I may have a radical change of heart toward the digital era of book reading.

I am a Professor of Biochemistry and Molecular Biology at the University of Nebraska Medical Center in Omaha, Nebraska where I mentor a group of about 10 students, postdoctoral fellows and researchers working on endocytic protein trafficking. My first lablit novel, "Matter Over Mind," is about a biomedical researcher seeking tenure and struggling to overcome the consequences of growing up with a parent suffering from bipolar disorder. Lablit novel #2, "Welcome Home, Sir," published by Anaphora Literary Press, deals with a hypochondriac principal investigator whose service in the army and post-traumatic stress disorder actually prepare him well for academic, but not personal success. Novel #3, "A Degree of Betrayal," is an academic murder mystery that is now in press! All views expressed are my own, of course--after all, I hate advertising. http://www.stevecaplan.net
View all posts by Steve Caplan →
This entry was posted in Uncategorized and tagged "Matter Over Mind", A Degree of Betrayal, author, book sales, books, ebooks, Kindle, library, omaha, reading, The Bookworm. Bookmark the permalink.

6 Responses to Reading into a major lifetime change?