No, not 100 Years of Solitude – Biochemistry! Last week was a very special occasion in our department – the celebration of 100 years of existence of our department, the Dept. of Biochemistry and Molecular Biology (BMB). 100 years is a considerable chunk of time; in fact, while I have inhabited this planet for half that time, only 11 of those years were spent here in BMB. And it amazes me to think that I was born closer to World War I than today’s date. Only a hop-skip-and-jump from WWII…

A lot of preparation went into the event last week; a series of seminars by former faculty, and students, current students and post-docs, and an outstanding seminar by keynote guest speaker Dr. Vann Bennett from Duke University (see photo).

To me, one of the most remarkable things about the 100 years of BMB is that our state, Nebraska, has really only seen settlement by Europeans since the mid 1800s, a mere 50 years or so prior to the establishment of our department. For those interested in superb novels detailing the lives of the early settlers in Nebraska, Willa Cather‘s novels are fascinating reads, and they describe feminist heroines who are light years ahead of their time.

Back to the point: although I had read some of the history of my institution, the organizers really helped shed light on the huge advances that have been made. Particularly interesting is the photo of the “North Laboratory Building” featured below, circa 1914! 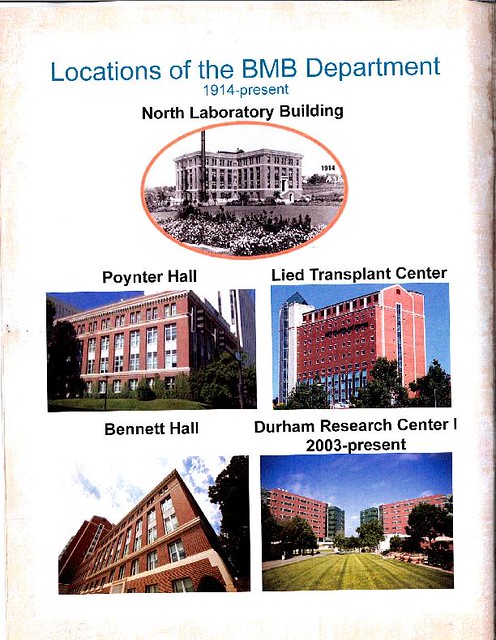 When I arrived on campus in 2003, I moved into an office in the famed Bennett Hall (pictured above). I was given laboratory space that contained piles of unsorted old equipment that looked as though they had been there prior to 1914. However, hope was just around the corner, literally, as the $77 million dollar Durham Research Center (DRC) I (the building on the right of the twin towers) was heavily under construction. But the months stretched out, and it was necessary for me to get my lab functional, so my initial experiments were done in the famed Bennett Hall – which has since undergone a dramatic makeover and gone over to the dark side (yes, administration).

Several years later, DRC II joined DRC I, and today we await completion of the new Fred and Pamela Buffett Cancer Center ($323 million) across the street.

There is a lot to be proud of, in a state with a population of less than 2 million people, dispersed over a vast area. And regardless of politics, the university widely enjoys the support of state and its people and politicians. On a personal level, I can also proudly say that as director of our microscopy core facility, I have helped obtain funding for a fantastic super-resolution microscope – described as being the second most advanced currently found in the US. From a single, and somewhat outdated confocal microscope in the facility when I arrived 11 years ago, to moving ahead of the curve with super-resolution illustrates the great leaps that we are making here in the mid-west. Exciting!

Of course no big celebration of this sort runs 100% smoothly, and shortly after the event was over a survey went out to solicit improvements and suggestions for… well… the 200 year celebration.

I am a Professor of Biochemistry and Molecular Biology at the University of Nebraska Medical Center in Omaha, Nebraska where I mentor a group of about 10 students, postdoctoral fellows and researchers working on endocytic protein trafficking. My first lablit novel, "Matter Over Mind," is about a biomedical researcher seeking tenure and struggling to overcome the consequences of growing up with a parent suffering from bipolar disorder. Lablit novel #2, "Welcome Home, Sir," published by Anaphora Literary Press, deals with a hypochondriac principal investigator whose service in the army and post-traumatic stress disorder actually prepare him well for academic, but not personal success. Novel #3, "A Degree of Betrayal," is an academic murder mystery that is now in press! All views expressed are my own, of course--after all, I hate advertising. http://www.stevecaplan.net
View all posts by Steve Caplan →
This entry was posted in research, science and tagged 100 years, Biochemistry and Molecular Biology, BMB, celebration, Nebraska, omaha, UNMC. Bookmark the permalink.

One Response to 100 years of…. biochemistry!