There have been a lot of articles published in newspapers around the world discussing a recent PLoS ONE paper published on July 23 by Harris and Provoust entitled “Jealousy in Dogs.” 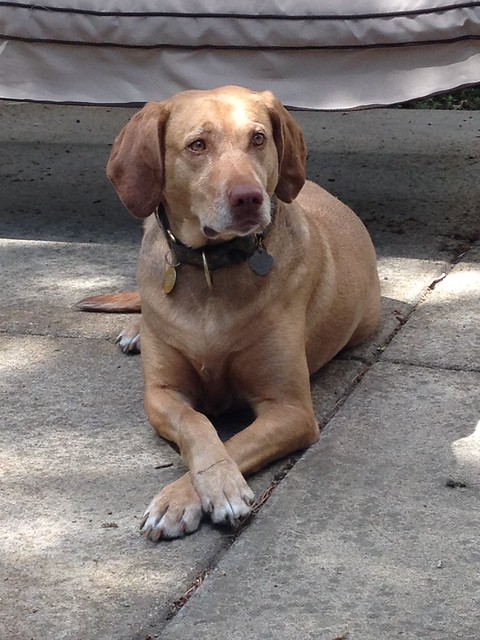 Ginger, in a reflective, non-jealous mode

For those who may not have seen the paper or the flurry of newspaper articles about the paper and its findings, I will briefly summarize: The behavior of 36 small dogs was analyzed when their owners either interacted with a realistic-looking stuffed dog or with a jack-o-lantern (as an object that is not similar to another dog). For a control, the owners read aloud a children’s book that was complete with pop-up functions and music.

Based on videos that were filmed of the dogs’ behavior, and the rating of the behavior by two individuals who were not told of the study’s purpose, the researchers found that the dogs showed jealousy by either aggression to the stuffed dog, or by inserting themselves between the stuffed dog and the owner; in essence, competing for attention. This was markedly greater for the stuffed dog than the non-dog/control objects.

Many dog owners commented in the media in response to the articles about the PLoS ONE paper that this was hardly surprising; everyone knows that dogs display jealousy. From my own experiences as a dog owner, I have no doubt that this is true. I have had two dogs in my lifetime; the first was intensely jealous of any affection shown not just to another dog, but to any person or even inanimate object. If I patted the table (and especially said “good dog”), he was capable of going beserk. My current favorite canine companion, Ginger (pictured here), doesn’t have a mean bone in her body, but will show very mild jealousy if provoked.

One commenter even voiced disgust that the US taxpayer was funding such research – when the conclusion was clear from the start. Are such studies a waste of money?

My unequivocal answer is “absolutely not.” First, the issue of dog jealousy is still hotly debated. In this forum I recently discussed UK canine researcher Prof. John Bradshaw’s audiobook “Dog Sense” and even noted that I disagreed with his conclusion that dogs cannot display jealousy because this emotion is too complex for the canine brain and requires a more developed “sense of self.”

However, even if this were not a point of dispute, I contend that this is the way science is done: observations that may seem empirical and intuitive to others must be supported by research, analysis and statistical interpretations. Conclusions cannot be taken for granted based on anecdotal observations.

Documenting is often the first scientific step along the pathway to understanding, and this is true for behavioral science as well as science at the cellular, molecular and atomic levels. According to the scientific method, hypotheses have to be made, and then either disproved or supported by experimentation. This is precisely what the authors of this study have done.

Regarding the impact of the study? As an academic editor at PLoS ONE, this is what the journal is all about: we do not rate the perceived impact of these studies – we simply address if they are solidly based and novel. Laying brick-on-brick; this is the essence of good science.

As I know that dogs rely on their keen sense of smell more frequently than their vision, I expect that the jealousy shown by the dogs in this study to an inanimate object might well be less than that displayed towards other real-life dogs. However, I am not an animal behaviorist by training. Therefore, I put my trust in the journal’s editors who are experts in this field, and have doubtlessly had the paper reviewed by other knowledgeable researchers in the field.

As for me, I look forward to learning more about my dog and her behavior. And now I can officially say that she shows jealousy when asked. Science now supports this contention.

I am a Professor of Biochemistry and Molecular Biology at the University of Nebraska Medical Center in Omaha, Nebraska where I mentor a group of about 10 students, postdoctoral fellows and researchers working on endocytic protein trafficking. My first lablit novel, "Matter Over Mind," is about a biomedical researcher seeking tenure and struggling to overcome the consequences of growing up with a parent suffering from bipolar disorder. Lablit novel #2, "Welcome Home, Sir," published by Anaphora Literary Press, deals with a hypochondriac principal investigator whose service in the army and post-traumatic stress disorder actually prepare him well for academic, but not personal success. Novel #3, "A Degree of Betrayal," is an academic murder mystery that is now in press! All views expressed are my own, of course--after all, I hate advertising. http://www.stevecaplan.net
View all posts by Steve Caplan →
This entry was posted in research, science and tagged animal behavior, behavior, canine, dog, dog sense, dogs, impact, jealousy, PLoS ONE, research, science, scientific method. Bookmark the permalink.