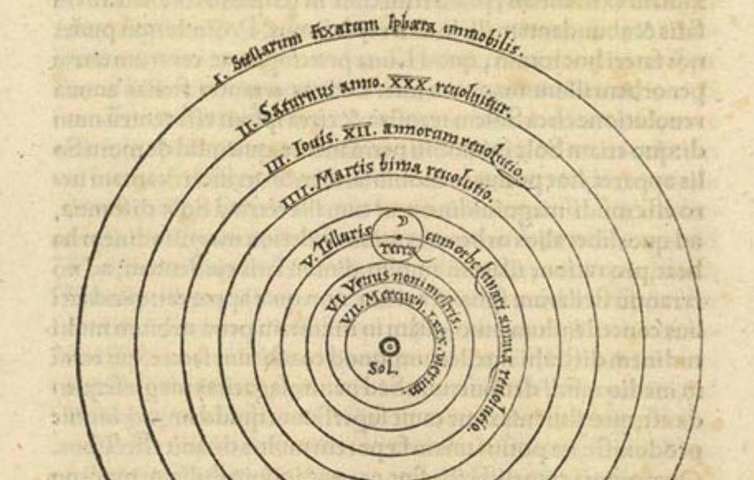 The revolutionary advance in our understanding of the universe, as proposed by Copernicus.

Donald Trump heads the single most anti-science administration that has ever set foot in the White House. It is fortunate that this self-centered, narcissistic personality, who born with a golden spoon in his vulgar mouth, has a Congress that still appreciates the value of science.

Long before stepping into the White House, this abominable president has been a disaster for science in the United States; he has transformed the Environmental Protection Agency into a climate-change deniers paradise, turned back the clock on pollution and regulations aimed at keeping our water drinkable and our air breathable, and proposed a ~20% cut to biomedical research. Fortunately Congress ignored his proposal and continued to modestly increase funding for biomedical research. But make no mistake; damage is being done.

So many of the terrible decisions being made are counter to any logic, and so absolutely insane that one wonders how anyone could possibly propose them. For example, the over-turning of a ban on a chemical fertilizer that is known to cause cancer in children and birth defects. Why? I mean really! Does anyone want their children or grandchildren to become ill with cancer? Just so the White House can say that they “deregulated” regulations made during the Obama period? Only a sick-souled person could do such a thing without his conscience affecting him.

It is no coincidence that science is “on the run” during the Trump administration. So is journalism and any honest inquiry aimed at divulging the truth. It seems that this is a type of ill-thought-out strategy, with the Orwellian type of idea that if everything is challenged, attacked, separated to left and right along partisan terms–then nothing has any absolute truth any more. Thus allowing the president to counter, for example, allegations of sexual misconduct as merely “fake news” propagated by his political enemies.

The most recent and horrific example of this Orwellian attack on truth is the Trump administration’s attempt to ban the Center for Disease Control (CDC) from using a variety of terms in their 2018 budget request. Which terms, you ask? Here they are:

Tough words, aren’t they? You wouldn’t want your children to voice them, would you?

A scientific center that is the number one agency to deal with diseases, like Zika virus, that can affect the fetus, wouldn’t want to do science-based and evidence-based research to protect vulnerable people?

In reading through my Twitter-feed, one fed-up tweeter wrote that we should remember this ridiculous ban when the Trump administration demands that we allow Neo-Nazis the right of free speech.

I’m sorry, but this has to be one of the scariest consequences of electing a thoroughly incompetent (and corrupt) president. If the US were not such a strong and overall good country, able to run on “autopilot” despite interference from the White House, we’d be in worse trouble.

Are we trying to reverse Copernicus?

I am a Professor of Biochemistry and Molecular Biology at the University of Nebraska Medical Center in Omaha, Nebraska where I mentor a group of students, postdoctoral fellows and researchers working on endocytic protein trafficking. My first lablit novel, "Matter Over Mind," is about a biomedical researcher seeking tenure and struggling to overcome the consequences of growing up with a parent suffering from bipolar disorder. Lablit novel #2, "Welcome Home, Sir," published by Anaphora Literary Press, deals with a hypochondriac principal investigator whose service in the army and post-traumatic stress disorder actually prepare him well for academic, but not personal success. Novel #3, "A Degree of Betrayal," is an academic murder mystery. "Saving One" is my most recent novel set at the National Institutes of Health. Now IN PRESS: Today's Curiosity is Tomorrow's Cure: The Case for Basic Biomedical Research (CRC PRESS, 2021). https://www.amazon.com/kindle-dbs/entity/author/B006CSULBW? All views expressed are my own, of course--after all, I hate advertising.
View all posts by Steve Caplan →
This entry was posted in Uncategorized and tagged anti-science, evidence-based, incompetent, science, science-based, Trump, white House. Bookmark the permalink.