Once upon a time there was respect for scientists…

Some families sit together and watch sitcoms, entertainment, or sports. Not my family; we are the classic science geeks. Two parents who both are researchers with a lab to run, one adult child who is a sophomore microbiology/biochemistry student at university, and a high schooler with a love for all things math and physics and an interest, potentially, in medicine. What do we watch? Recently we began a fascinating series called “Charite,” named after the famous Berlin hospital, and dealing with the lives of the doctors, researchers and nurses who worked there toward the end of the 19th century. 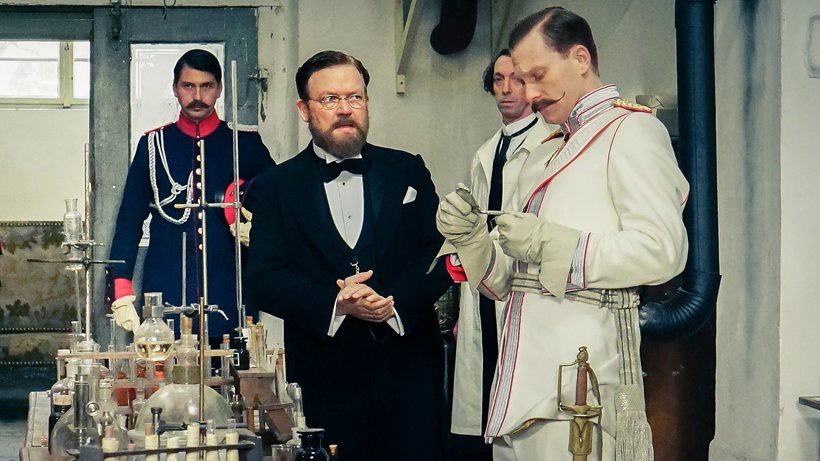 Robert Koch is visited in his laboratory by the German Kaiser and his entourage. A scientist in that era was accorded the highest respect.

I read somewhere that this German-made miniseries has been described as a sort of Downton Abbey of the medical sciences, with the professors and doctors likened to the wealthy Crawley family, and the nurses and assistants paralleled to the servants living on the lower level of the Downton Abbey manor. But personal stories and love affairs aside, the series brings to life three of the most significant researchers of this era: 1) The famous bacteriologist and immunologist Robert Koch, who laid the groundwork for the causal relationships between bacteria and diseases. Koch, famous for his Koch’s Postulates, a series of conditions that he deemed necessary to formally prove that a disease was caused by a specific microbe, made groundbreaking discoveries in tuberculosis, anthrax and cholera research. 2) Paul Erlich, who despite contracting tuberculosis, had a long and fruitful career in which he developed anti-sera and drugs against a variety of bacteria and parasites. 3) Emil von Behring, who made tremendous discoveries in the area of diphtheria and tuberculosis.

The apex of all three of these fathers of immunology centered in the miniseries around their common work at the Charite, bringing to life their strengths and weaknesses as people, their tempers and intimacies, their humanity. The story is compelling, and while one will not necessarily come away with a better understanding of the science behind vaccines, bacterial infections and immunology, that is far from the point; it is easy to pull up the information online. The beauty of Charite is in the recreation of the era–a time when electricity was barely available and yet these dogged researchers were carrying out controlled experiments in animals, and even testing their anti-serums on themselves and each other–to test safety before their antidotes became public.

Perhaps the most intriguing part of Charite is the depiction of the scientists in the eye of the public at the time; the visits from the German Kaisers to the hospital, the degree of respect and honor accorded to the scientists for the work. The promises of more money for research, new institutes, new hospitals. The general adulation of researchers by the public-at-large. Indeed, Robert Koch was essentially pursued by an up and coming pretty young singer/actress who–at least in the miniseries–seems to have fallen as much in love with his research as with the man himself.

I do not bemoan the lack of adulation by young actresses for my own research career–but honestly–some respect and more support by the government would benefit the research community and the public at large. More than border walls and military parades. Will someone please take note?

I am a Professor of Biochemistry and Molecular Biology at the University of Nebraska Medical Center in Omaha, Nebraska where I mentor a group of students, postdoctoral fellows and researchers working on endocytic protein trafficking. My first lablit novel, "Matter Over Mind," is about a biomedical researcher seeking tenure and struggling to overcome the consequences of growing up with a parent suffering from bipolar disorder. Lablit novel #2, "Welcome Home, Sir," published by Anaphora Literary Press, deals with a hypochondriac principal investigator whose service in the army and post-traumatic stress disorder actually prepare him well for academic, but not personal success. Novel #3, "A Degree of Betrayal," is an academic murder mystery. "Saving One" is my most recent novel set at the National Institutes of Health. Now IN PRESS: Today's Curiosity is Tomorrow's Cure: The Case for Basic Biomedical Research (CRC PRESS, 2021). https://www.amazon.com/kindle-dbs/entity/author/B006CSULBW? All views expressed are my own, of course--after all, I hate advertising.
View all posts by Steve Caplan →
This entry was posted in Education, research, science and tagged Charité, Erich, Koch, Professor, von Behring. Bookmark the permalink.