Many geologists and climatologists believe that global warming aside, the next major global climate issues are most likely to come from the explosion of a super-volcano; after all, just look at what an isolated Icelandic volcano did to air traffic across the globe recently. 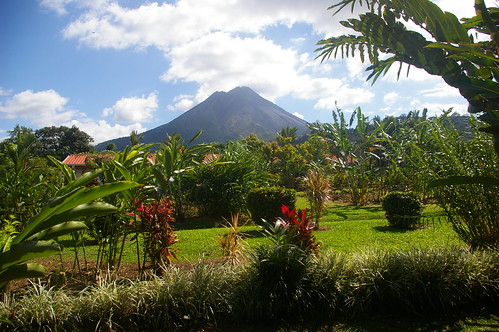 The Arenal stratovolcano in Costa Rica. Dormant since 2009, it has a frightening history.

On this visit to Costa Rica, we spent the majority of our time somewhere in the vicinity of the now dormant (but still emitting smoke) Arenal volcano. When last in Costa Rica, we were in the area for 3 days and never even had the opportunity to see the mountain, with rain and clouds throughout our stay.

We did a variety of activities around the Arenal, including birding, zip lining, tubing and hiking, and there was one specific  hike with a guide who gave us a perspective on the geology and history of the Arenal. We learned that in 1968, the volcano gave disturbing signs of activity, but that the people in the surrounding villages (whose ancestors lived there for centuries not knowing this was a volcano) did not evacuate their homes to seek shelter elsewhere. After all, the volcano crater was miles away. What could possibly happen?

What did happen was that the volcano virtually exploded, creating secondary craters, expelling a huge flow of lava, and heaving boulders that weighed several tons as far as several miles from the crater – in fact, within an area of about 15 square kilometers. Two towns were entirely obliterated, and ~80 people lost their lives. Including a rescue team that got caught in the lava several days after the initial explosion.

The town on the west side of the volcano, which was spared altogether, was thus renamed La Fortuna, for having the good fortune of being outside the range of the Arenal – at least on this occasion.

So while we do need to take care of our environment, I think the lessons of volcanoes (even when confused with myths of animals fleeing the Yellowstone caldera in the wake of movies and internet stirring up fear among the masses) are that life is fragile; and as many of us know to be true – evolution on this planet has been shaped far more by geological events than people typically give credit.

I am a Professor of Biochemistry and Molecular Biology at the University of Nebraska Medical Center in Omaha, Nebraska where I mentor a group of students, postdoctoral fellows and researchers working on endocytic protein trafficking. My first lablit novel, "Matter Over Mind," is about a biomedical researcher seeking tenure and struggling to overcome the consequences of growing up with a parent suffering from bipolar disorder. Lablit novel #2, "Welcome Home, Sir," published by Anaphora Literary Press, deals with a hypochondriac principal investigator whose service in the army and post-traumatic stress disorder actually prepare him well for academic, but not personal success. Novel #3, "A Degree of Betrayal," is an academic murder mystery. "Saving One" is my most recent novel set at the National Institutes of Health. Now IN PRESS: Today's Curiosity is Tomorrow's Cure: The Case for Basic Biomedical Research (CRC PRESS, 2021). https://www.amazon.com/kindle-dbs/entity/author/B006CSULBW? All views expressed are my own, of course--after all, I hate advertising.
View all posts by Steve Caplan →
This entry was posted in science and tagged Arena, Costa Rica, eruption, La Fortuna, supervolcano, Tabicon, tragedy, volcano. Bookmark the permalink.